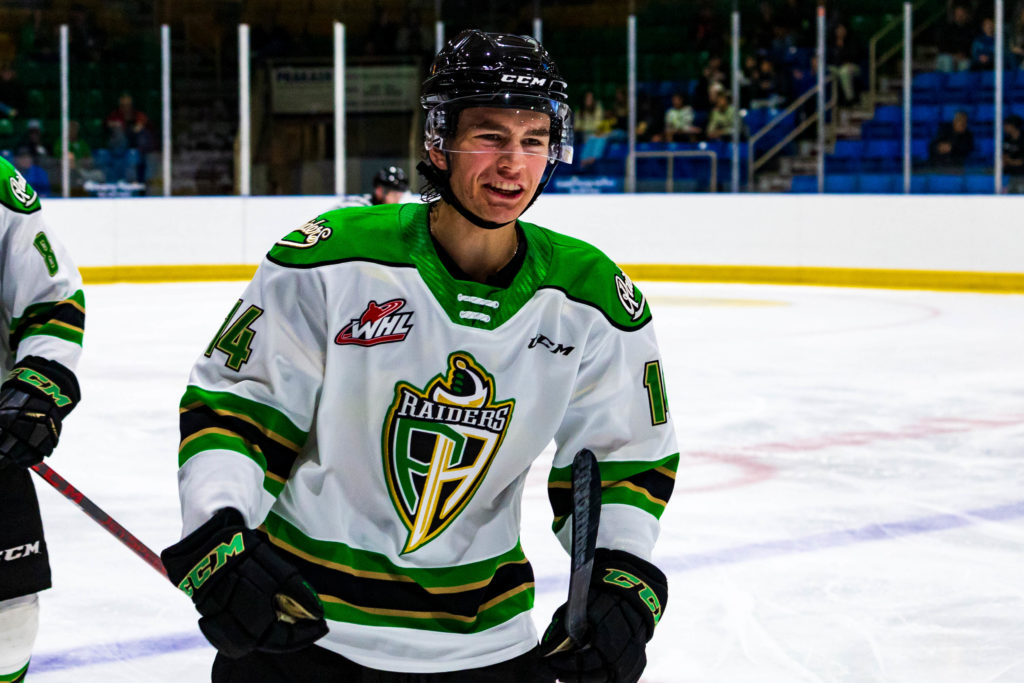 The Prince Albert Raiders fell to the Regina Pats on home ice on Friday night, losing 3-2 to even their preseason record at 1-1-0-0.

The goals started midway through the first period, with Tye Spencer of the Pats taking advantage of a misplay in the Raider zone. Handling the puck behind the net, goaltender Tikhon Chaika bobbled his pass and turned the puck over to Spencer in the corner. From a tight angle, Spencer let a shot go that just squeaked through Chaika and in, as Regina jumped out to a 1-0 lead despite being outplayed by PA in the first half of the frame.

Leading by a commanding 18-8 shot margin after 20 minutes, the Raiders found themselves trailing 1-0 on the goal sheet heading into the second period. Evan Herman and Sloan Stanick led most of the Raider chances in the opening frame, but Drew Sim was up to the task between the pipes for Regina, turning aside all 18 shots.

The Pats extended their lead 6:08 into the second period on a shorthanded breakaway. With both teams exchanging possession in a scrambly play on a Prince Albert powerplay, Cole Dubinsky won the loose puck at center ice and worked his way in alone on Chaika. Making no mistake, Dubinsky found a hole low on Chaika, extending the Pats lead to 2-0, and that’s how the score would stay after 40 minutes.

Regina took control of the contest just 56 seconds into the final regulation frame, as Alexander Suzdalev cleaned up his own rebound in front. A pass from Dubinsky in the corner to a streaking Suzdalev in front resulted in an initial one timer from the slot that was turned aside by Max Hildebrand, who entered the game in the second period. Hildebrand kicked a rebound right back to Suzdalev who came crashing in for the rebound, and the Russian import made a backhand deke to tuck a shot home to make it a 3-0 lead.

Despite being down by a trio of goals, the Raiders did not go away. Three minutes after Suzdalev’s tally, Cole Peardon got the Raiders on the board with a neat deflection on a Trevor Thurston point shot. Finding the five hole on Kelton Pyne, Peardon brought the Raiders back to within two, making it a 3-1 contest.

With under 8 minutes left in the third, Seth Tansem got in on the scoring action with a powerplay goal for PA. Taking a pass from Evan Herman, Tansem ripped a shot from the left circle, off the post and in, cutting the Regina lead to 3-2.

However, that’s as far as the green and gold would come to mounting a comeback, as the Pats hung on for the 3-2 win in their first preseason game of the year.

Next up for both clubs is the second half of a home and home set on Saturday night. The action goes live from the Brandt Centre in Regina with a 7pm puck drop.