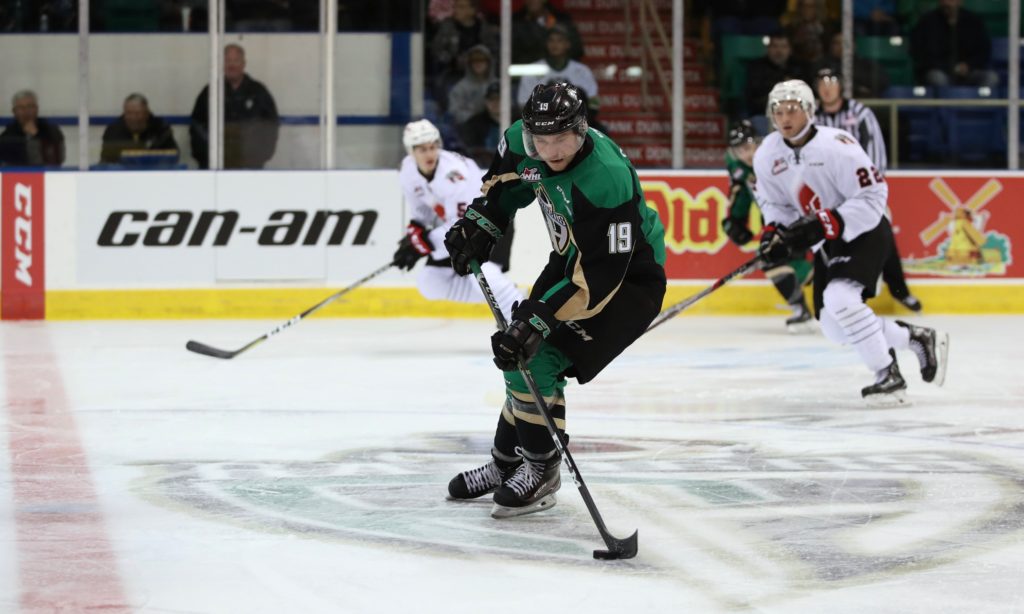 Moose Jaw, SK – The Prince Albert Raiders turned on the pressure late, but couldn’t climb out of an early hole in a 7-3 loss to the Moose Jaw Warriors at Mosaic Place on Saturday night.

The Raiders fired 43 shots at Warriors goaltender Brody Willms, including 24 in the third period, but were unable to overcome a 4-2 deficit heading into the final frame.

The Warriors got on the board 4:28 into the opening frame when Jayden Halbgewachs beat Nicholas Sanders with a wrist shot off the rush. Five minutes later, Brecon Wood got a puck past Sanders to make it a 2-0 game.

The Raiders scored their first goal of the 2017-18 season with 5:01 remaining in the opening period. Brock Sottile hit Devon Skoleski with a beautiful stretch pass, who made no mistake in beating Willms to cut the lead to one. However, Tanner Jeannot scored with 1:50 remaining in the frame to restore the Warriors’ two-goal lead.

In the second, Jett Woo’s shot got past Sanders and trickled over the goal line to give the Warriors a 4-1 lead. Three minutes later, Jordy Stallard buried a tape-to-tape cross-ice pass from Cole Fonstad on a power play to cut the lead back down to two.

Just 53 seconds into the third and immediately after a Raiders’ power play expired, Brayden Burke gave the Warriors another three-goal lead. Four minutes later, Parker Kelly tallied his first goal of the season to make it a 5-3 game.

A two-goal lead was as close as the Raiders would get. Noah Gregor and Justin Almeida both scored late in the third to give Moose Jaw the 7-3 win.

Sanders finished the game with 23 saves in his first start of the season for the Raiders. Willms stopped 40 shots in the win.

The Raiders are back in action on Friday, September 29 when the Calgary Hitmen visit the Art Hauser Centre. Game time is 7 p.m. Tickets are available at the Raider Office or at raiderhockey.com.