Raiders Downed By Pats In Regina 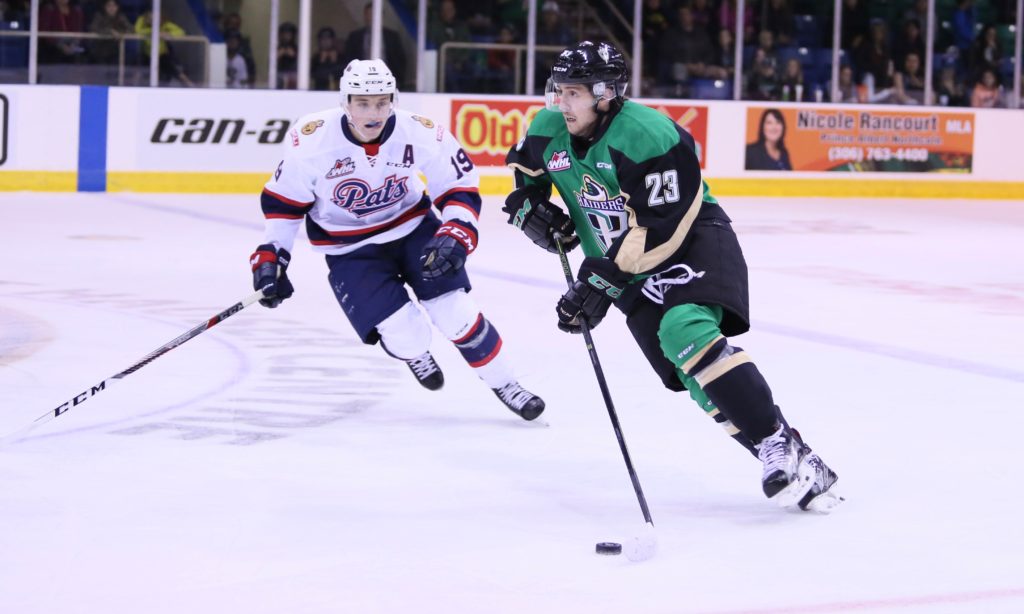 Regina, SK – The Prince Albert Raiders (6-21-1-0) were defeated 12-2 by the Regina Pats at the Brandt Centre on Saturday night.

Regina scored twice within the first 4:08 of the games as Adam Brooks and Dawson Leedahl got the Pats on the board. Rykr Cole added another at the 12:38 mark of the frame. Simon Stransky cut into the Pats’ lead with his 11th goal of the season, snapping a shot off of an offensive zone faceoff past Tyler Brown. With 1.3 seconds left in the opening period, Sergey Zborovskiy scored to make it a 4-1 game after 20 minutes.

The Pats added four more goals in the second period. Riley Woods, Nick Henry, Connor Hobbs and Zborovskiy all found the back of the net to put the Pats up 8-1 heading into the third.

In the final frame, Brooks and Austin Wagner each scored in the first 1:23 of the period. Austin Glover took advantage of a Pats’ turnover at the 2:50 mark, beating Brown on the power play. Less than 30 seconds later, Wagner responded with his second of the game. Rykr Cole rounded out the scoring with 18 seconds left to give Regina the 12-2 win.

Nicholas Sanders got the start in the game, but was pulled after allowing three goals in the first period. Ian Scott took over, making 20 stops before being relieved on the first goal of the third period. Sanders retook the net to finish the game with 15 saves. Brown stopped 14 shots in the Pats win.

The Raiders are back in action on Tuesday night when they host the Calgary Hitmen at the Art Hauser Centre. On Friday, the Raiders hold their Teddy Bear Toss Night against the Moose Jaw Warriors. Fans bringing teddy bears to the game are encouraged to wrap them in a plastic bag before throwing them on the ice. Both home games this week start at 7 p.m. Tickets are available at raiderhockey.com, at the Raider Office or by calling 306-764-5438.