Raiders Down the Warriors to Wrap Up the Weekend 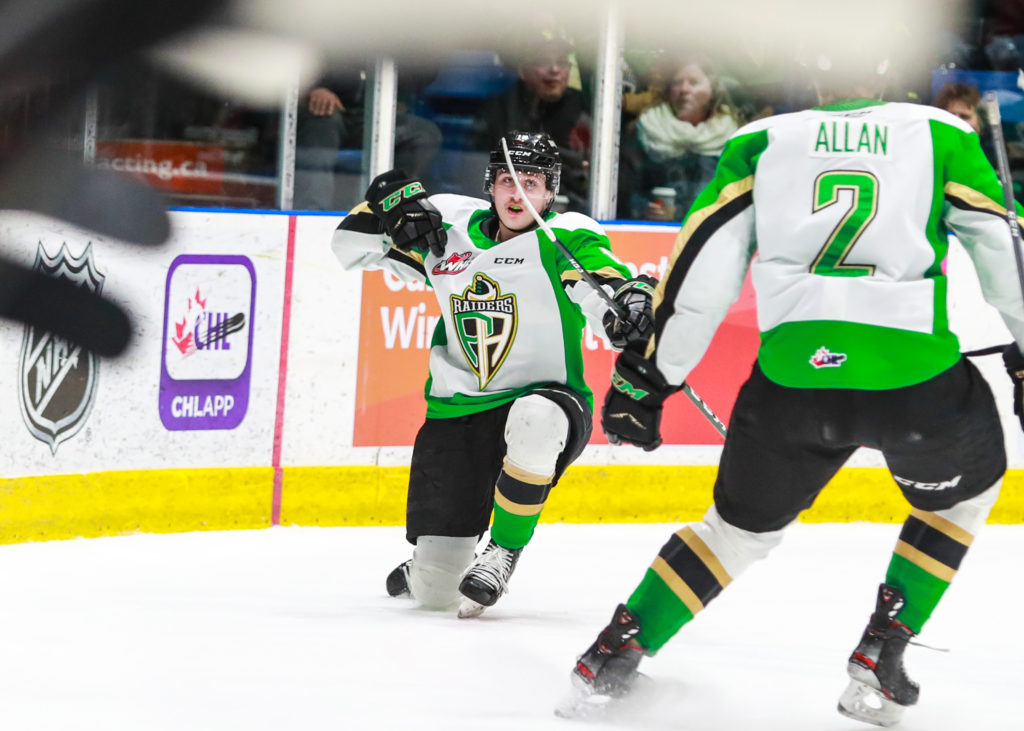 Protas’ goal was his seventh game winner of the season, to increase his team lead. Ozzy Wiesblatt and Kaiden Guhle also scored in the win for the Raiders.

Wiesblatt opened the scoring midway through the first period. He fished the puck out of a scrum in front of the Raiders’ end and forced a two-on-one rush. Wiesblatt decided to keep and picked the corner over Boston Bilous’ glove for his 24th goal of the year, making it 1-0.

Shortly after, Protas nearly doubled the lead. He was standing at the side of the goal when Brayden Watts made a quick pass to feed him the puck from the front of the net. However, Bilous sprawled over and got in front of the shot to keep it a one-goal game.

Late in the first, the Warriors tied it on the power play. After the Raiders were unable to clear the zone, Cade Hayes was given space to step into a shot and he beat Carter Serhyenko to send the game to the first intermission tied at 1-1.

The Raiders dominated the shot clock for the second straight opening period, firing 17 shots on goal in the first compared to Moose Jaw’s six.

Six minutes into the middle frame, the Warriors took the lead with another power-play marker. Martin Lang made a pass across the top of the zone to Ryder Korczak. He was able to skate down to the faceoff circle and a get a shot off that got past Serhyenko to put Moose Jaw up 2-1.

Guhle got the goal back for the Raiders with 9:06 to play in the period after an extended stay in the offensive zone. The 2020 NHL Draft prospect fired a low shot from the point that got through traffic and through Bilous to tie the game at 2-2, giving Guhle 11 goals on the year.

In the third, the Raiders took the lead back early in the frame. Spencer Moe worked for the puck behind the Warriors goal and got it over to Brayden Watts. The overager found Protas in front of the goal and the Washington Capitals prospect put the puck past Bilous for his 29th goal of the year to give the Raiders a 3-2 advantage.

Throughout the rest of the period, the Raiders had chances to increase their lead. On a man advantage, Wiesblatt toe-dragged into the centre of the zone and fired a shot that beat Bilous, but hit the cross bar and bounced out.

The Raiders kept the pressure out of their end until the final 2:54 of the period when they faced a shorthanded situation. With Bilous pulled for the extra attacker, the Warriors came close but were unable to find the equalizer. The game ended with a key block from Jeremy Masella at the side of the goal to preserve the win.

Serhyenko, making his first start since February 1 against Swift Current, stopped 14 shots to pick up his seventh win of the year. Bilous finished with 40 saves between the pipes for the Moose Jaw Warriors.

The Raiders are back in action when they host the Calgary Hitmen on Tuesday night at the Art Hauser Centre. Game time is 7 p.m. Tickets are available at the Raiders Office and online here.