Raiders comeback in third period to beat the Blades 3-1 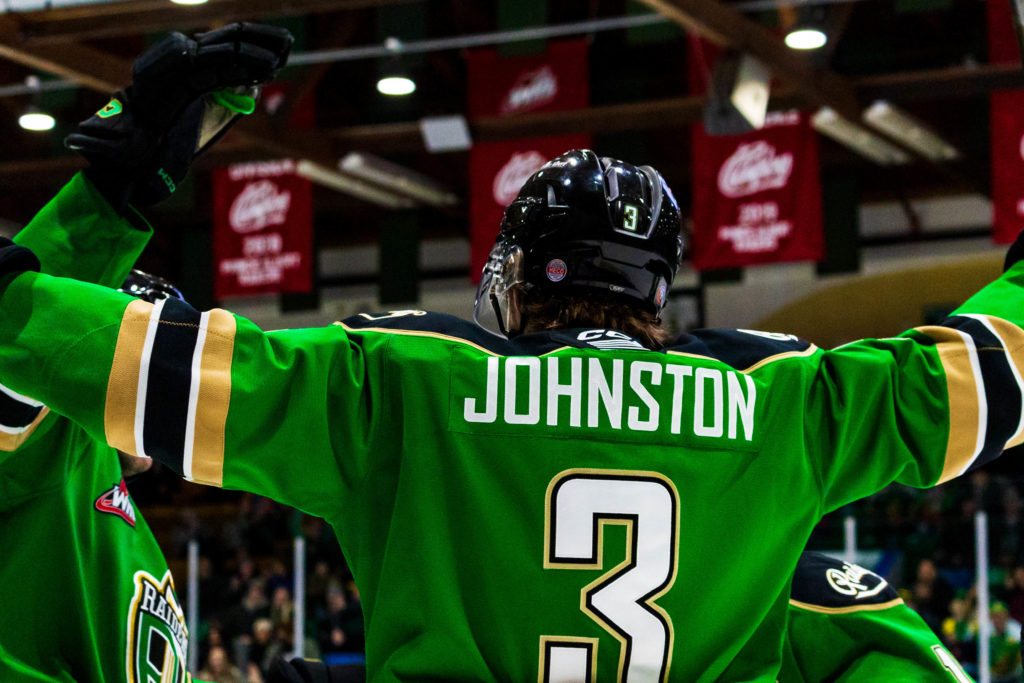 The Prince Albert Raiders picked up their first win of the season against their biggest rival Saskatoon Blades on Saturday night at the Art Hauser Centre by a 3-1 final. It was a game they trailed 1-0 in the third period, but three unanswered goals from Keaton Sorensen, Niall Crocker, and Eric Johnston were enough to complete the comeback.

In what was an overall quiet first period, the Blades scored the only goal to take a 1-0 lead after 20 minutes. On the powerplay, Jake Chiasson set up Brandon Lisowsky in front, and the Toronto Maple Leafs draft pick banged home his 23rd goal of the season to put Saskatoon in the lead 7:58 into the game.

As was expected between the two rivals, there was a lot of pushing and shoving during stoppages in play, most notably between Evan Herman and Vaughn Watterodt on the wings before faceoffs. A physical tone was set by both sides in the opening frame, but it was the Blades who had the advantage on the scoreboard, leading 1-0 heading into the second period.

The Raiders came to life offensively in the third period, scoring three unanswered goals. Keaton Sorensen tied the game just 1:37 into the third on a Raider powerplay, banging home a rebound on the doorstep. His 16th goal of the season was a big one to tie the game, but the Raiders weren’t done there.

With 7:42 left in the third and the Raiders on another powerplay, Niall Crocker gave the Raiders the lead. From the left circle, Crocker sniped his 7th goal of the season home through traffic, making it a 2-1 game.

Just 15 seconds later, the Raiders scored to go up 3-1. From the point, Eric Johnston fired a shot that beat Austin Elliott. Johnston collected his first goal of the season and one of the biggest in his WHL career, giving Prince Albert a two goal lead.

Late in the game, the Blades pulled the goalie for the extra attacker, but couldn’t solve Tikhon Chaika. The Belarusian netminder stopped 24 of 25 shots on the night, as the Raiders solved the Blades for the first time this season, winning by a 3-1 final in front of Raider faithful.

The Raiders picked up their 16th win of the season, and it was a huge one in terms of momentum heading into their B.C. road trip next week. Prince Albert’s first game of the road swing is on Saturday night in Prince George.