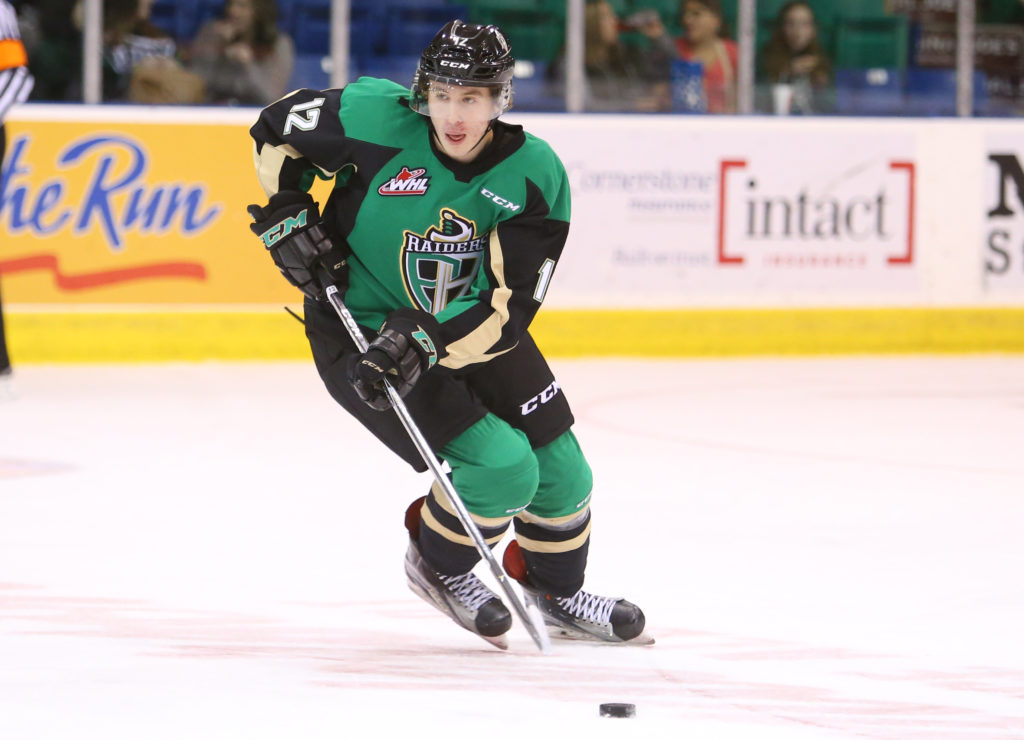 Saskatoon, SK – The Prince Albert Raiders (32-27-9-4) made a furious comeback in the final moments of the game, but were unable to find the equalizer in a 5-4 loss to the Saskatoon Blades (35-33-3-1) at the SaskTel Centre on Saturday night.

With the loss, the Raiders finished the season with 77 points on the season.

The Blades took the lead midway through the first period when Max Gerlach beat Curtis Meger from the slot.

Late in the period, the Raiders got on the board. Max Martin chipped a puck ahead to Sean Montgomery, creating an odd-man rush with Spencer Moe. Montgomery passed off to Moe, who snapped a shot past Tyler Brown to tie the game with 3:15 left in the period.

Saskatoon responded quickly with two goals. Mark Rubinchik regained the lead for Saskatoon a minute after Moe’s goal. Then with 1:01 remaining, Gerlach tallied his second of the game off a rebound.

In the second, the Blades increased their lead with a power-play goal. Gerlach completed his hat trick when he buried a cross-ice pass.

The Raiders cut the lead in half midway through the third. Curtis Miske tipped a shot through Brown at the 10:46 mark of the frame.

Late in the third, Evan Fiala restored the Blades’ three-goal lead with an empty-net marker.

After that empty netter, the Raiders kept pressing. Sergei Sapego scored twice in the final two minutes of the game. However, it was as close as the Raiders came as the Blades pinned the puck in the corner as the final seconds ticked away.

Meger finished the game with 27 saves in the loss. Brown stopped 33 Raider shots to pick up the win.

The Raiders now turn their attention to the Moose Jaw Warriors for the first round of the WHL Playoffs. Game 1 of the best-of-seven series is on Friday night in Moose Jaw. Games 3 and 4 are back in Prince Albert on Tuesday, March 27 and Wednesday, March 28, respectively.

Playoff packages are now available for purchase in the Raider Office. Single game tickets go on sale on Wednesday morning at 9 a.m.