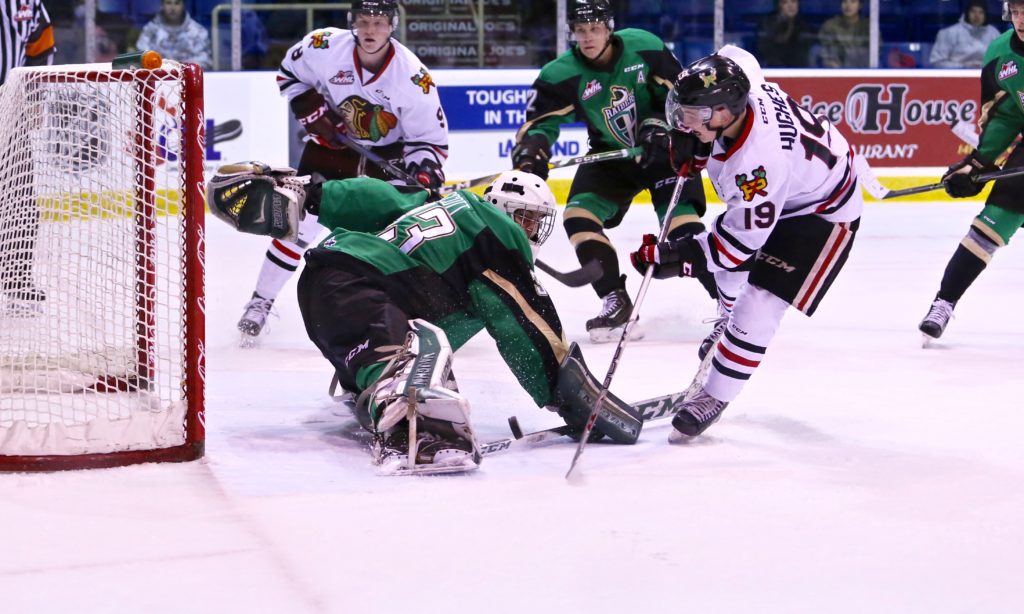 Prince Albert, SK – The Prince Albert Raiders put together a valiant effort in the third period, but it wasn’t enough as the visiting Portland Winterhawks skated to a 5-3 win at the Art Hauser Centre on Wednesday night.

The Raiders entered the third period trailing 4-0 following two goals from Cody Glass, one from Colton Veloso and one from Evan Weinger.

Early in the third period, Tim Vanstone collided with Winterhawks goaltender Cole Kehler, knocking off his mask and pushing him away from the net. Sean Montgomery jumped on the loose puck in the crease and snapped it into the empty net. The play was reviewed and the goal stood.

Five minutes later, rookie Cole Fonstad found the back of the net for the first time in the WHL to make it a 4-2 game. Spencer Moe assisted on the goal to earn his first WHL point. At the 10:28 mark of the first, the Raiders made it a one-goal game when Simon Stransky buried his team-leading fourth goal.

However, the Winterhawks iced it with 1:21 to play as Blichfeld scored into the empty net to make the final 5-3.

Rylan Parenteau got the start in goal for the Raiders on Wednesday night. He allowed four goals on 22 shots before being replaced by Ian Scott at the 13:17 mark of the second period. In relief Scott stopped all 17 shots he faced in his 26 minutes of ice time.

The Raiders hit the road for the next three games, beginning on Thursday night. They head down Hwy 11 to take on the Blades at the SaskTel Centre. Puck drop is 7:05 p.m.

The next Raiders home game is on Saturday, October 15 when the Brandon Wheat Kings visit the Art Hauser Centre. Game time is 7 p.m.