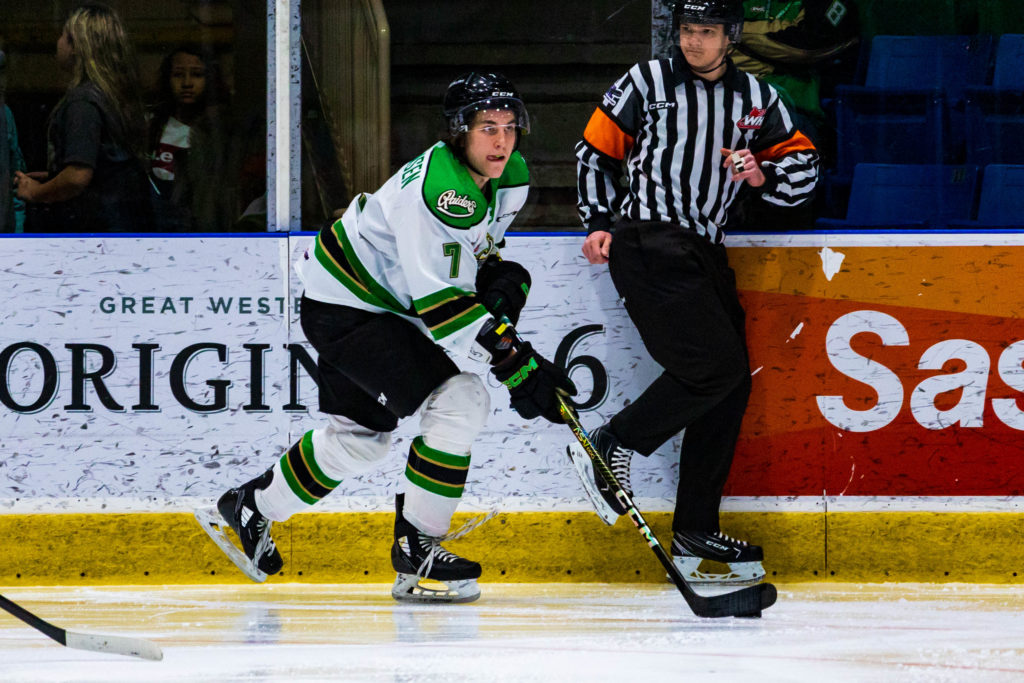 The Prince Albert Raiders’ comeback bid fell just short on Friday night in Brandon, as they fell 5-4 to the Wheat Kings. The Raiders fought back from a 5-2 deficit in the third period, but couldn’t find the equalizing goal.

Hayden Pakkala opened the scoring 5:46 into the first period, giving the Raiders an early lead on the road. A point shot from Owen Boucher was tipped by Niall Crocker in front, but the rebound came free to Pakkala. Pakkala threw a backhand shot on goal that beat Wheaties starter Carson Bjarnason. His fourth goal of the season gave the visitors a 1-0 lead in the early stages of the contest.

With just over 8:30 to go in the first, the Wheat Kings tied things up. It was Luke Shipley who took advantage of an awful turnover by a Raider defender. Stealing a clearing attempt, Shipley fired an original shot that was blocked by another defender, but the rebound came right back to Shipley, who fired another shot that beat Tikhon Chaika who was looking for the puck. Shipley’s third goal of the season knotted the score at 1-1 midway through the opening frame.

With 2:52 left in the first, the Wheat Kings took their first lead of the night. Zakhar Polshakov ripped a shot from the high slot that beat Chaika blocker side, beating his Belarusian counter part for his third goal of the season to give Brandon a 2-1 lead in the late stages of the first period.

The Wheat Kings scored twice in the opening 1:13 of the second period to take a commanding 4-1 lead in the early stages of the middle frame. Nate Danielson started things off, crashing the net and taking a feed in front from Nolan Ritchie. On the doorstep, Danielson tapped home his 14th goal of the season to make it 2-1. 1:01 later, Brett Hyland made it 4-1 with his eighth goal of the season.

However, just over two minutes later, the Raiders cut into that lead. Carson Latimer led a rush into the Brandon zone, speeding down the right wing. Moving down low, Latimer sent a feed in front for Harrison Lodewyk, who tapped home his third goal of the season, making it a 4-2 deficit.

Three minutes later, Brandon restored their three goal lead. Rylen Roersma tipped a point shot from Quinn Mantei home past Chaika. The goal marked the first time the Wheat Kings have recorded five goals in a game this season, as Roersma picked up his sixth goal of the season, making it a 5-2 lead.

A scary moment occurred with three seconds left in the second period. Gabe Ludwig, in his first game in a Raider jersey, went in on the forecheck, chasing Charlie Elick who was turning up ice with the puck. Ludwig threw a check on Elick, who appeared to lose an edge on the play. Elick ended up crashing hard into the boards, and stayed down on the ice. Trainers from both teams rushed onto the ice to come to Elick’s aid, who was not moving a muscle, in what looked to be an injury to his neck. Around 15 minutes went by before Elick was stretchered off the ice. Elick gave a thumbs up to his team and Wheat Kings fans, which brought an eruption of applause to Brandon faithful at Westoba Place.

The puck was dropped and the remaining three seconds of the second period ticked off, as the Wheat Kings took a 5-2 lead into the third period, but they would have to finish the game without one of their defencemen.

Just 43 seconds into the third period, the Raiders cut into the Brandon lead once again. Keaton Sorensen gathered a loose puck and spun around in the slot to find a wide open Ryder Ritchie. All alone in front, Ritchie had a wide open net to fire home his third goal of the season to make it a two goal game.

Just under three minutes later, the Raiders scored again to make it a one goal game. A 3 on 1 rush down the ice was capitalized by Keaton Sorensen. The middle man streaking down the ice, Sorensen elected to keep the puck and fire a shot, beating Bjarnason low on the blocker side. His 13th goal of the season was a huge one, as it made it just a 5-4 Brandon lead, still early in the third period.

Despite battling hard for the remainder of the third period, the comeback bid fell just short for the Raiders, as the Wheat Kings held on for a 5-4 win on home ice. Chaika stopped 22 of 27 shots in goal for the Raiders, while Bjarnason turned aside 11 of 15 shots thrown at him in the win.

Next up for Prince Albert is a trip to Winnipeg for their second meeting of the season with the ICE. Puck drop is 7pm.