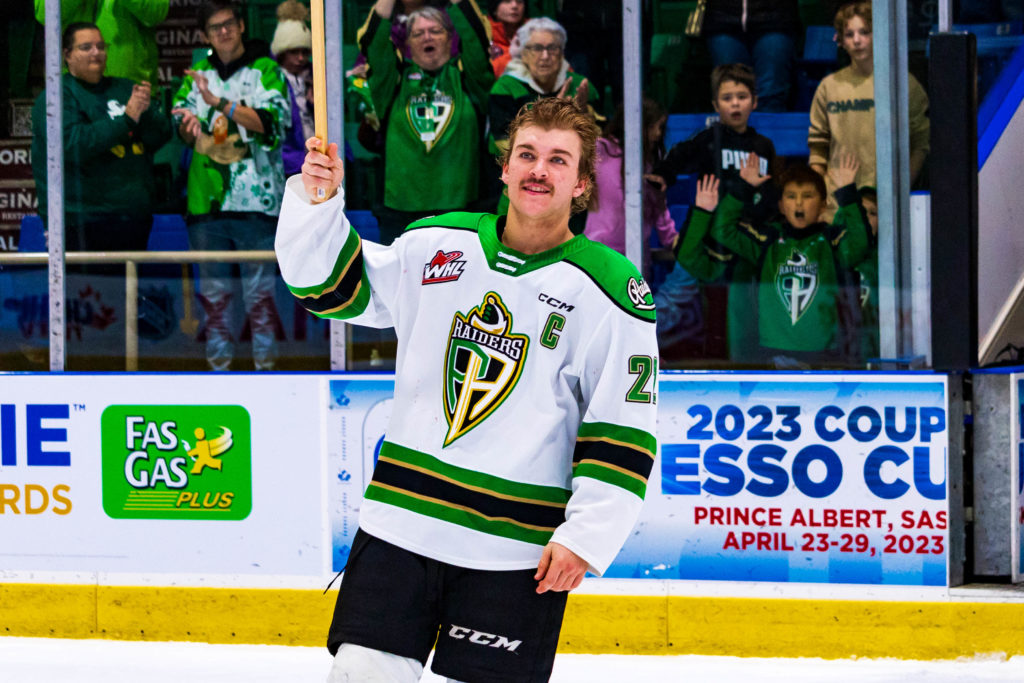 It was a multi-milestone weekend for Prince Albert Raiders captain Evan Herman. On Friday night, the 20-year-old forward reached the 50 goal plateau, as the Raiders beat the Calgary Hitmen 5-2. On Sunday night, Herman tallied his 100th career WHL point, as he registered a goal and an assist as part of a 4-2 win in Medicine Hat over the Tigers.

“It was a cool feeling,” Herman said about scoring his 50th career goal. “To do it with some of my best friends out there on the ice with me and all of my teammates, it makes the memory even better.”

A veteran of 171 WHL games to this point in his career, reaching 100 career points was another big milestone for the overage forward. To achieve both milestones in games that the Raiders won over the weekend was huge for Herman, but the captain quickly gave credit to the teammates around him for his accomplishments.

“It’s a pretty cool achievement, but it can’t be done with any of my teammates,” he said. “Being able to do it alongside those guys makes it way more memorable to me.”

Herman made his initial mark in the league back on September 27, 2019 in a game against the Regina Pats, where he scored his first Western Hockey League goal. When asked what his favourite point or goal was so far in his career, Herman paused for a while to think, before deferring to his first career goal.

The Raiders have two games on the road this weekend in Brandon and Winnipeg, before returning home for five straight games before the holiday break. The Raiders have won five of their last six contests, but Herman says the job isn’t nearly done if this group wants to hold onto a playoff spot heading into the break.

“I think we just need to keep demanding a little more from everyone,” Herman explained. “Everyone here is trying to get better every day, and we continue to build. We just need to stick together as a group and keep playing the right way, and I think as long as we stick to our gameplan and keep doing the things that we’ve been doing right, we’ll be successful.”

The Raiders will be looking for a big fan boost for their five games before the break. The atmosphere that the team will be in coming home and playing in front of their fans will be a big boost for the team. It’s something Herman says can’t be compared.

“The fans are like our seventh skater. When they get bumping and into the game, there’s no comparison in any other rink. They definitely help take a weight off our backs, and makes the ice feel a little slanted in our favour. That makes the game a lot easier.”

Prince Albert’s next home game is on Wednesday, December 7th against the Brandon Wheat Kings for Food Bank Night. Fans are encouraged to bring non-perishable food items in support of the Prince Albert Food Bank.

Friday, December 9th marks the annual Teddy Bear and Toque toss night. The Raiders welcome the Regina Pats to the Art Hauser Centre that night for a 7pm puck drop.

After that, the team will welcome the Medicine Hat Tigers on Wednesday, December 14th, before heading into the holiday break with a game against the Spokane Chiefs on Saturday, December 17th.

The team will be off for nine days after that, before returning to the ice on Tuesday, December 27th in Saskatoon against the Blades.