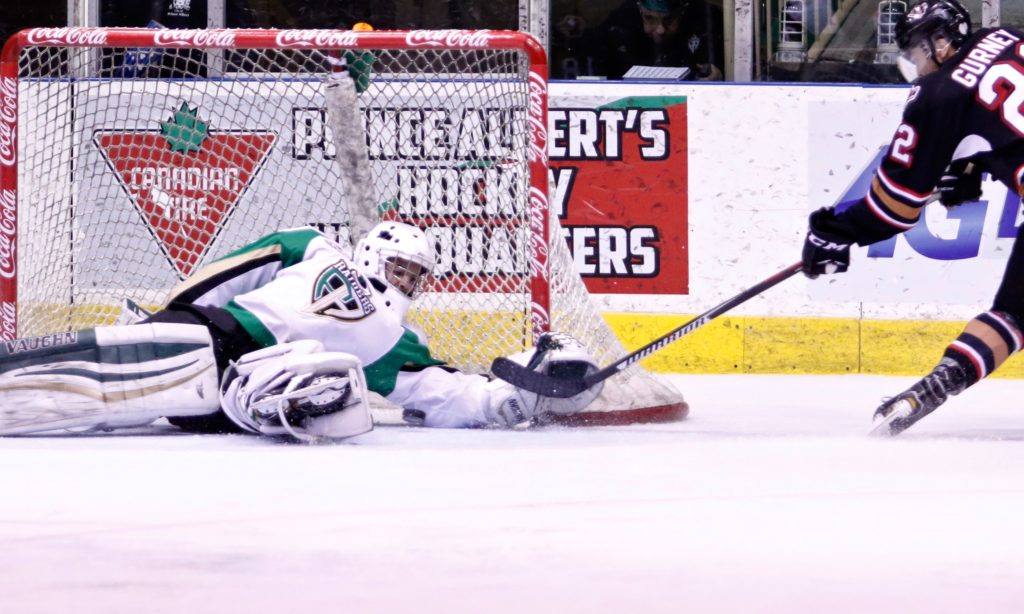 Prince Albert, SK – The Prince Albert Raiders (8-31-2-2) erased two two-goal deficits on Wednesday night, but they were never able to gain the lead in a 5-4 overtime loss to the Calgary Hitmen (15-19-4-2) at the Art Hauser Centre.

In the first, Justyn Gurney and Andrew Grishakov found the back of the net to give the Hitmen a 2-0 lead midway through the period.

The Raiders battled back in the first half of the second period. First, Cole Fonstad made a beautiful behind-the-back to pass to Adam Kadlec, who directed it into the net to bring the Raiders back within one 2:49 into the period.

Here’s a look at the pretty pass by @fonstad_24. pic.twitter.com/3znc9iXzeD

Then, Kolten Olynek beat Trevor Martin at the 10:53 mark to tie the game. However, the Hitmen took the lead with 6:38 left in the period when Brady Reagan beat Ian Scott.

Five seconds into the third period, Jakob Stukel gave the Hitmen a two-goal lead again. The Raiders showed their fight again to level the score. Jordy Stallard netted his first as a Raider 8:15 into the period. Cavin Leth tied the game with 6:04 to play.

In overtime, Vladislav Yeryomenko pounced on a turnover and scored the game-winning goal at the 2:11 mark of the extra period.

Scott stopped 27 shots for the Raiders in the loss. Martin turned aside 25 Raider shots to pick up the win.

The Raiders are back in action on Friday night when Austin Glover and the Red Deer Rebels visit the Art Hauser Centre. Puck drop is 7 p.m. It’s the first of three games in three nights for the Raiders. They also host the Regina Pats on Sunday afternoon for a 4 p.m. contest. Tickets are available here, the Raider Office or by calling 306-764-5348.