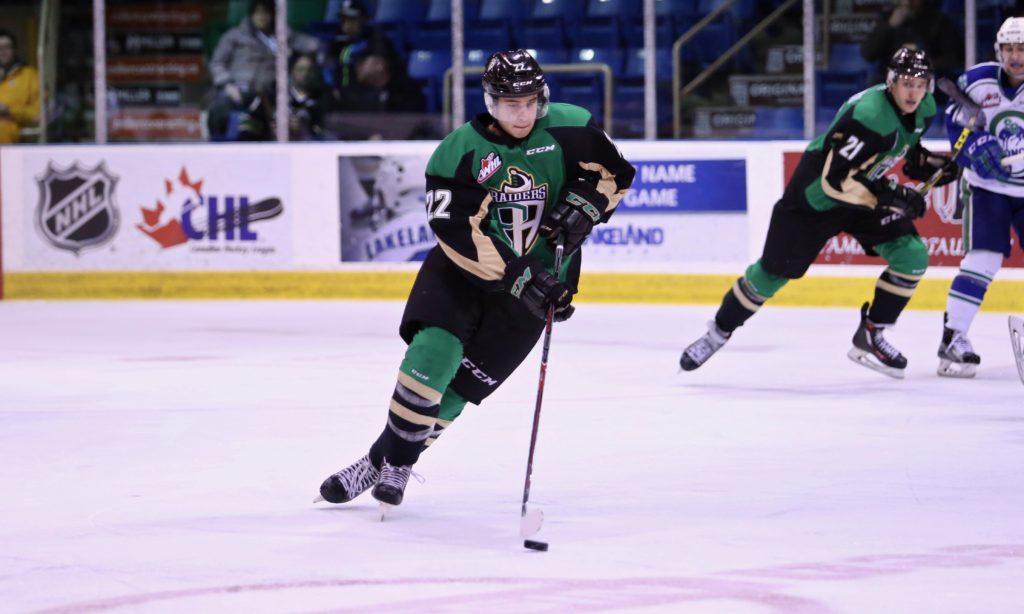 Carson Miller scored the lone Raiders’ goal in the loss. Austin Glover drew an assist on the goal, extending his point streak to eight games.

It was a 0-0 game until the closing moments of the opening period. Sahvan Khaira’s shot ricocheted off of Loch Morrison and Zack Hayes’ skates and past Nicholas Sanders to put the Broncos up 1-0. Just as the buzzer sounded to end the period, Tim Vanstone and Kharia dropped the gloves after Cavin Leth and Tyler Steenbergen got tangled up.

And this is how the first period ends in Swift Current pic.twitter.com/tis4GddHwv

The physical play continued early in the second. Leth and Glenn Gawdin got into a shoving match that eventually turned into a five-minute major for fighting and a10-minute misconduct for each player.

Four minutes after the dust settled, the Raiders drew even on the scoreboard. Miller made a nice toe-drag move to the centre of the zone and snapped a shot through a screened Travis Child’s five-hole for his second goal of the season.

SCORESS! Carson Miller snaps one through a screen on a power play. 1-1 game. pic.twitter.com/g5CgCXxbu3

The Broncos restored their lead later in the period. After Sanders robbed Steenbergen with a diving save, Aleksi Heponiemi made no mistake with the rebound to give the Broncos a 2-1 lead after two periods.

At the 7:48 mark of the third, the Broncos extended their lead. Ryan Graham beat Sanders from the slot to give Swift Current a 3-1 lead. With 47 seconds remaining, Lane Pederson added an empty-net goal to make the final 4-1.

Sanders was strong again in net for the Raiders with a 37-save performance in the loss. Child stopped 20 shots to pick up the win for the Broncos.

The two teams are back at it again on Saturday night at the Art Hauser Centre to close out the home-and-home series as well as the first half of the WHL season. Tickets can be purchased here, in the Raider Office, or by calling 306-764-5348.