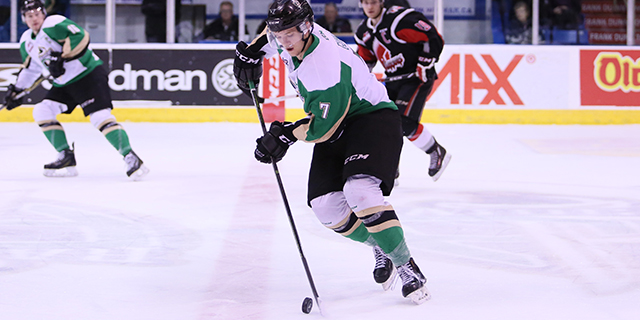 Prince Albert SK – The Prince Albert Raiders are pleased to announce that Brendan Guhle has been reassigned to the American Hockey League’s Rochester Americans by the Buffalo Sabres for the remainder of the 2015-16 season.

Guhle was selected by the Sabres in the second round, 51st overall, in the 2015 NHL Draft. The Sherwood Park, AB product was signed by the NHL team to a three-year entry-level contract on July 27, 2015.

The six-foot-two, 189-pound blue liner dressed in 63 games during his third season with the Raiders, following an extended stint with the Sabres in October. Guhle scored a career-high 10 goals and added 18 assists for 28 points. In 186 career WHL games, Guhle has recorded 15 goals and 55 assists for 70 points.

In November, Guhle took part in the 2015 Canada Russia Series where he was a +1 in two games.

Prince Albert Raiders 2016-17 season tickets go on sale on Monday, April 11. Get the best seats at the best price for all 36 home games by visiting the Raider Office at the Art Hauser Centre or by ordering online at raiderhockey.com