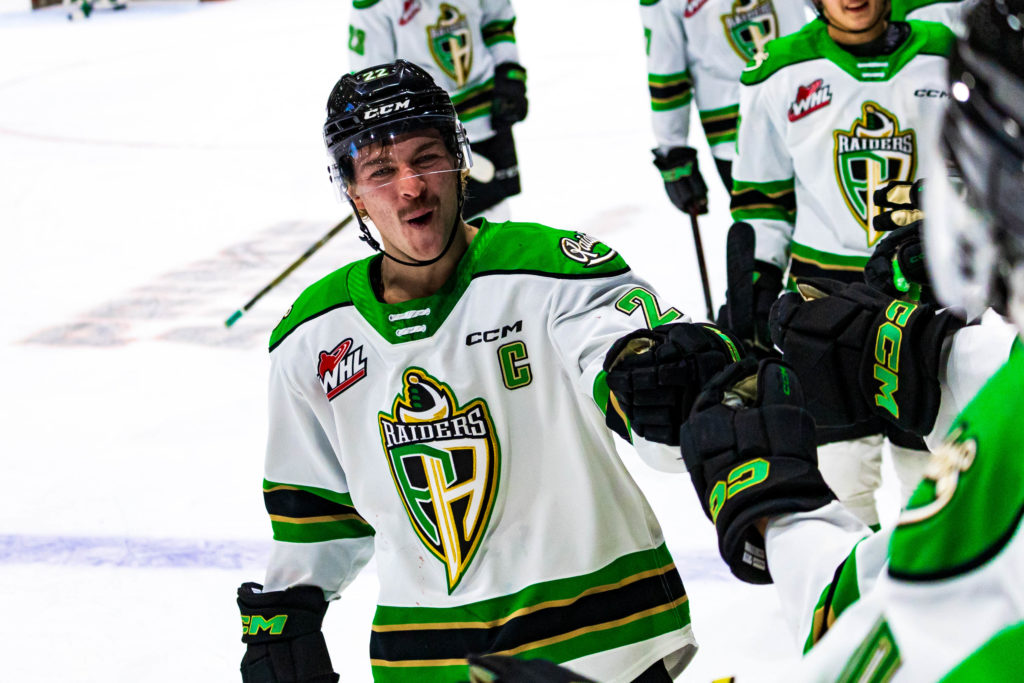 The Prince Albert Raiders picked up their fourth win in their last five games with a 5-4 win over the Medicine Hat Tigers on Saturday night at the Art Hauser Centre.

A penalty filled first period started off with a goal just 1:13 into the game when the Tigers opened the scoring. Shane Smith picked the puck up from the slot and fired a shot that beat a screened Tikhon Chaika between his head and his glove. His seventh goal of the season put the visitors up 1-0 early into the contest.

After that, it seemed like a penalty was called after every whistle and during every play. The Tigers took back to back penalties to put the Raiders on a long 5 on 3 man advantage, but the team failed to find a tying goal on that powerplay.

All together, 44 penalty minutes were assessed. 10 of those minutes came in a fight between Harrison Lodewyk and Kurtis Smythe. Lodewyk delivered a hit to Smythe during play which the latter didn’t appreciate, so the two dropped the gloves a few seconds later. Lodewyk came flying in with a Superman-like punch to take Smythe down to the ice quickly. The two exchanged more blows on the ice, and were escorted to their dressing rooms with less than five minutes to go, with Lodewyk heading off with a big grin on his face as his teammates showed their appreciation for the bout.

After 20 mintues, the Tigers took their 1-0 lead into the second period, while the Raiders led 9-3 in shots on goal.

Much like the first period, the Tigers struck quickly to start the second period. Just 3:05 into the middle frame, Brendan Lee made it a 2-0 game. Owen MacNeil dropped a pass for Lee, who blasted a one timer low past Chaika’s glove far side. His 12th goal of the season put the road side up 2-0.

From there, the Raiders stormed back to tie the game. Sloan Stanick started the comeback with a seemingly harmless shot from just outside of the slot. The snap shot beat Evan May far side off the post and in for Stanick’s fifth goal of the season, as it became just a 2-1 Tigers lead with under two minutes left in the second.

In the dying seconds of the second period, the Raiders tied it up on their eighth powerplay of the contest, and it came from the captain. In his first game with the ‘C’, Evan Herman ripped a shot from near the point that beat May five hole to make it a 2-2 game. With 0.6 seconds showing on the clock, the captain found his third goal of the season, knotting things up at 2-2 heading into the third period, with Prince Albert leading 19-13 in shots.

Five goals were scored in the third period with the Raiders scoring three compared to the Tigers’ two. Landon Kosior started the scoring with a powerplay goal 3:36 into the third to give the Raiders their first lead of the night at 3-2.

Tyler MacKenzie tied things back up for Medicine Hat with a goal of his own just over a minute later. Sloan Stanick and Evan Herman scored a goal each six minutes apart for both of their second goals of the contest to put the home side up 5-3.

With zero seconds on the clock, Cayden Lindstrom added a goal for the Tigers to make it 5-4, and that would end up being the final. The Raiders picked up their fourth win over their last five games and improved to 8-12-2-0, and moved into a share for the eighth playoff spot in the Eastern Conference.

The Raiders will head on the road for five straight games now with the road trip kicking off in Calgary on Friday night.