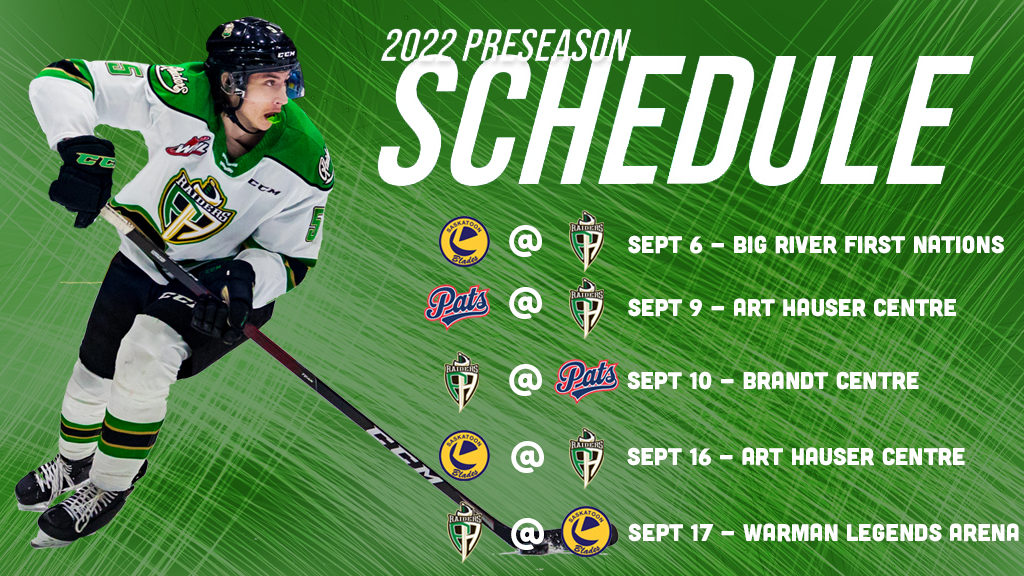 The Raiders are thrilled to announce their 2022 Pre-Season Schedule.

The Raiders will play five games in total in the pre-season, kicking off with a game between long-time rivals, the Saskatoon Blades, on the land of the Big River First Nations at the opening of the Jim Nielsen Arena.  “We are excited and honoured to be invited by Chief and Council of the Big River First Nation as well as the organizing committee behind this great event” added Raiders General Manager Curtis Hunt, “We look forward to playing in front of members of their community and thank the Blades for agreeing to play us there”.

Following the September 6th game which is the first game played in the entire league, the Raider will play 2 more sets of home and home weekend sets against divisional rivals.  On September 9th (Art Hauser Centre) and 10th (Brandt Centre), the Raiders will play Connor Bedard, Tanner Howe, and the Regina Pats.  The following weekend, Prince Albert will host the Blades on September 16th before heading to Warman to finish off the pre-season schedule at the Legends Arena against Saskatoon.

Season Tickets – Early Bird Deadline for Season Tickets is rapidly approaching. Book your seats prior to June 30th and realize significant savings on your tickets.