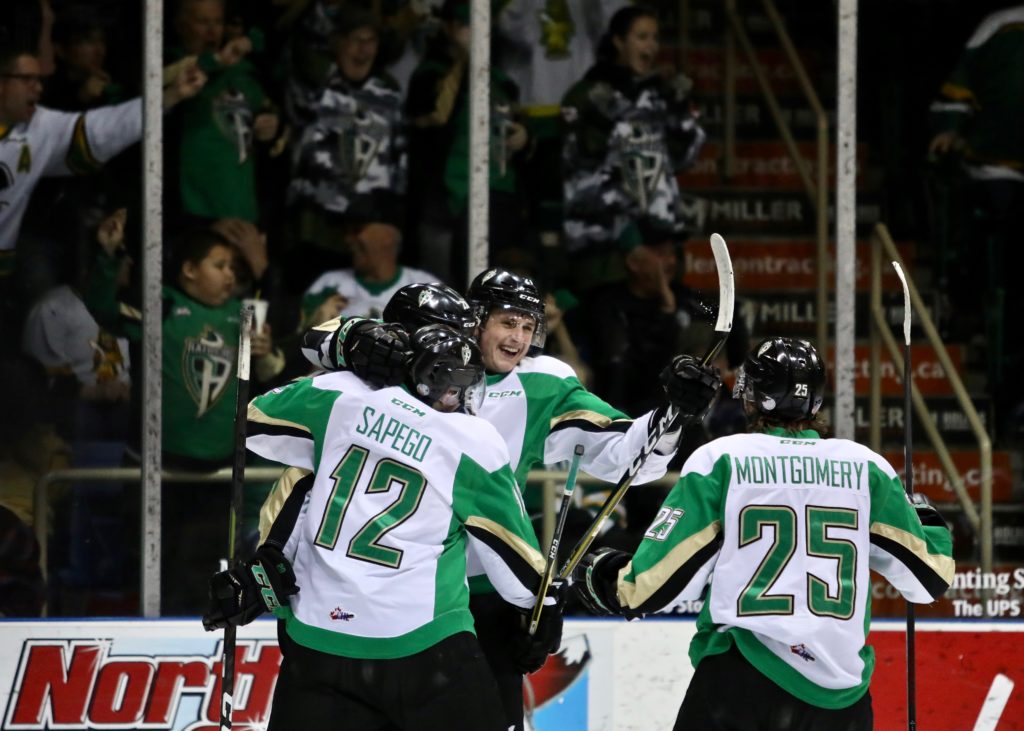 Prince Albert, SK – Aliaksei Protas had a hat trick and an assist to lift the Prince Albert Raiders to a 4- win over the Edmonton Oil Kings in Game 5 of the Eastern Conference Final on Friday night at the Art Hauser Centre.

It was the first hat trick and four-point night of Protas’ WHL career, whether it be in the regular season or the WHL Playoffs. The Raiders now hold a three-games-to-two lead in the Eastern Conference Championship.

Brett Leason also chipped in a goal and an assist, while Kaiden Guhle and Sergei Sapego each registered two assists.

The Oil Kings had jump to start the game, but Ian Scott was able to keep his team in the game early. The Toronto Maple Leafs stopped nine shots in the first 10 minutes of the contest as Edmonton buzzed.

Shortly after the timeout, the Raiders got on the board via the power play. From the right wing, Protas recorded his first goal of the night by picking the corner short-side on Dylan Myskiw with 8:29 to play in the first period.

Later in the period, Protas found the back of the net again. The Belarusian rookie threw a pass towards goal that got through Leason, an Oil Kings defender, and between Myskiw’s pads to make it a 2-0 game with 2:57 left in the period.

Tonight’s Insurance Goal of the Game was scored by #21 Aliaksei Protas (@protas_21)!

In the second, the Raiders nearly made it 3-0 on an early power play. However, Myskiw was able to deny Noah Gregor on a cross-crease pass and then two quality chances for Protas.

The score stayed the same until the third period. Protas lobbed a pass from inside the Raiders’ end that landed on the tape of Leason. The Calgary, AB product skated into the zone on the right wing and beat Myskiw on the far side for this fifth goal of the playoffs, giving the Raiders a 3-0 lead 5:22 into the period.

Late in the game, Protas completed his hat trick. In a similar fashion to his first goal, Protas snapped a shot past Myskiw on the short-side for his eighth goal of the WHL Playoffs with 25 seconds remaining.

After a busy first period, Scott didn’t face many shots as he finished the game with 24 saves for his second shutout of the series and third of the WHL Playoffs.

Myskiw made 26 saves in a losing effort for the Oil Kings.

The Raiders have a chance to wrap up the Eastern Conference Championship as the series shifts back to Edmonton for Game 6 on Sunday afternoon. Puck drop at Rogers Place is 2 p.m.