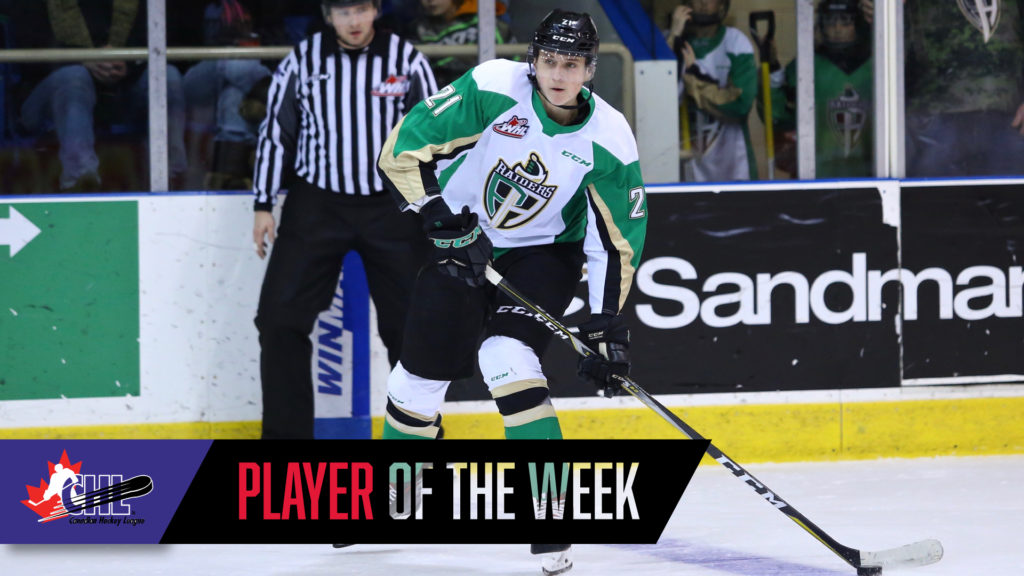 Toronto, Ont. – The Canadian Hockey League today announced that forward Aliaksei Protas of the Prince Albert Raiders is the CHL Player of the Week for the sixth week of playoff action ending April 28, 2019.

Protas, a prospect eligible for the 2019 NHL Draft, recorded seven points (6G-1A) and carried a plus-three rating as the Raiders defeated the Edmonton Oil Kings in their six-game Eastern Conference Championship campaign, advancing to the 2019 Rogers WHL Championship Series.

The Prince Albert rookie stepped up with back-to-back hat tricks, beginning with a four-point outing as he tallied on each goal in the Raiders’ 4-0 win over the Edmonton Oil Kings in Game 5 to earn first-star recognition. Two nights later, the NHL Draft eligible forward notched another hat trick in a 4-2 win over the Oil Kings that sealed the WHL Eastern Conference Championship win in six games as Protas earned third-star honours. The win pushed the Raiders to the 2019 Rogers WHL Championship Series for the first time since 1985, as the team now faces off against the Vancouver Giants for the Ed Chynoweth Cup.

Through 16-playoff appearances, Protas has collected 15 points, including a WHL-leading 11 goals. The native of Vitebsk, Belarus has emerged as one of the Raiders most impressive players through the playoffs after he wrapped up the regular season with a modest 11 goals and 29 assists for 40 points in 61 games. The 18-year-old ranks 44th among North American skaters by Central Scouting ahead of the 2019 NHL Draft.

Also considered for the award this week was Edmonton Oilers draft pick and Guelph Storm defenceman Dmitri Samorukov, who tallied eight points (4G-4A) in four games, including his first career hat trick, to help his squad to a seven-game series victory over the Saginaw Spirit in the Ontario Hockey League Western Conference Championship. Montreal Canadiens prospect and Rouyn-Noranda Huskies forward Joel Teasdale, who notched five points (1G-4A) in his past two outings to help his club sweep the Rimouski Oceanic in the third round of the Quebec Major Junior Hockey League playoffs was also considered.