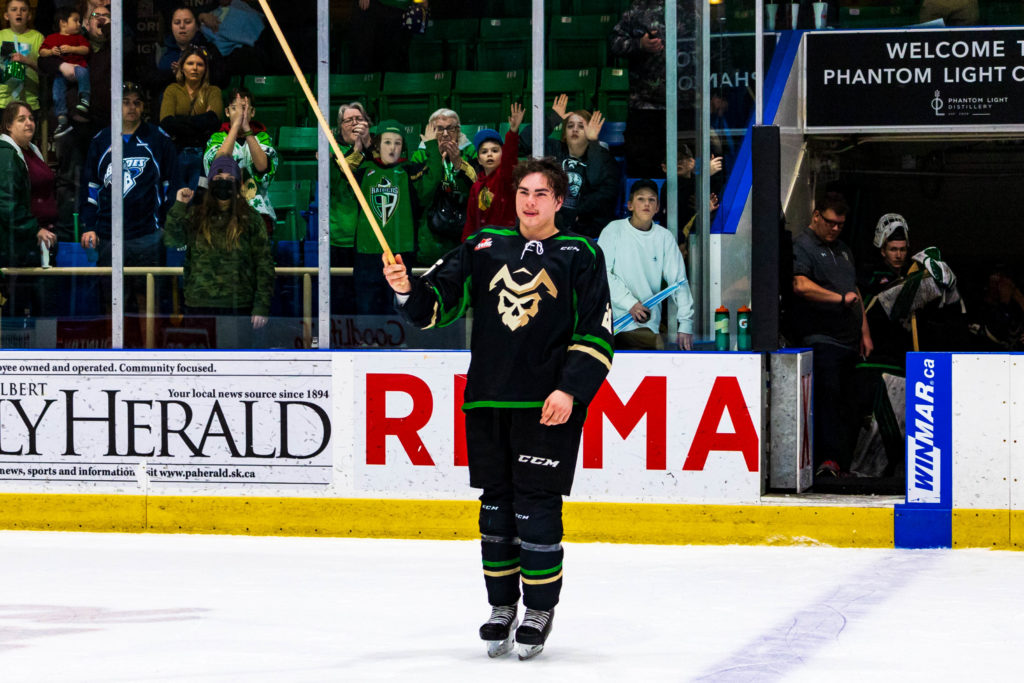 There’s no question that Prince Albert Raiders forward Dallyn Peekeekoot has become a fan favourite through two seasons of his WHL career. The Ahtahkakoop First Nation product was a tenth round pick by the Raiders in the 2019 WHL Prospects Draft, but burst onto the WHL scene in Regina during the Hub season, scoring his first Western Hockey League goal in his third career game in a 4-2 win over the Swift Current Broncos.

Now entering his third year in the league, Peekeekoot says his freshman and sophomore years have been big stepping stones, but he’s been able to settle in with the pace of the WHL.

“Back in the bubble I got to play with Justin Nachbaur and I learned a lot from him. He’s native too, and it was really cool to play with him and I learned a lot. Just getting to play with some of the older guys on the team is good because they do a good job leading the way for the young guys. I was able to learn how to do things around the team and how to be a good guy and improve my on-ice ability.”

Peekeekoot settled into a depth role with the Raiders in the 2021-22 campaign, spending most of the year on the third line with Hayden Pakkala and Keaton Sorenson. While Sorenson and Pakkala put up 28 and 18 points respectively, many of their line’s scoring chances were created by Peekeekoot’s rugged determination to battle for pucks in the corner, and his fearless style of play fighting for positioning in front of the net.

While he was comfortable playing in that role, the 5’11, 208lb forward says he enjoyed when he was sent out to shut down other team’s top lines. Something about facing more dangerous competition ignited another spark in Peekeekoot’s game, and that’s something he hopes he gets the chance to do once again in the 2022-23 season.

“I like to be out there against the top guys,” he said. “I like to play more of a faster game, but I just like being out on the ice as much as possible. This year I want to find more of a scoring touch and play a little bit tougher. I want to be a tougher guy on the team but still be able to score goals. I just want to help the team and be a better all around player.”

Peekeekoot, as well as the rest of the Raiders, will be back on the ice with their first preseason game on Sept. 6th for a game against the Saskatoon Blades in Big River First Nation for the opening of the Jim Nielson Arena.