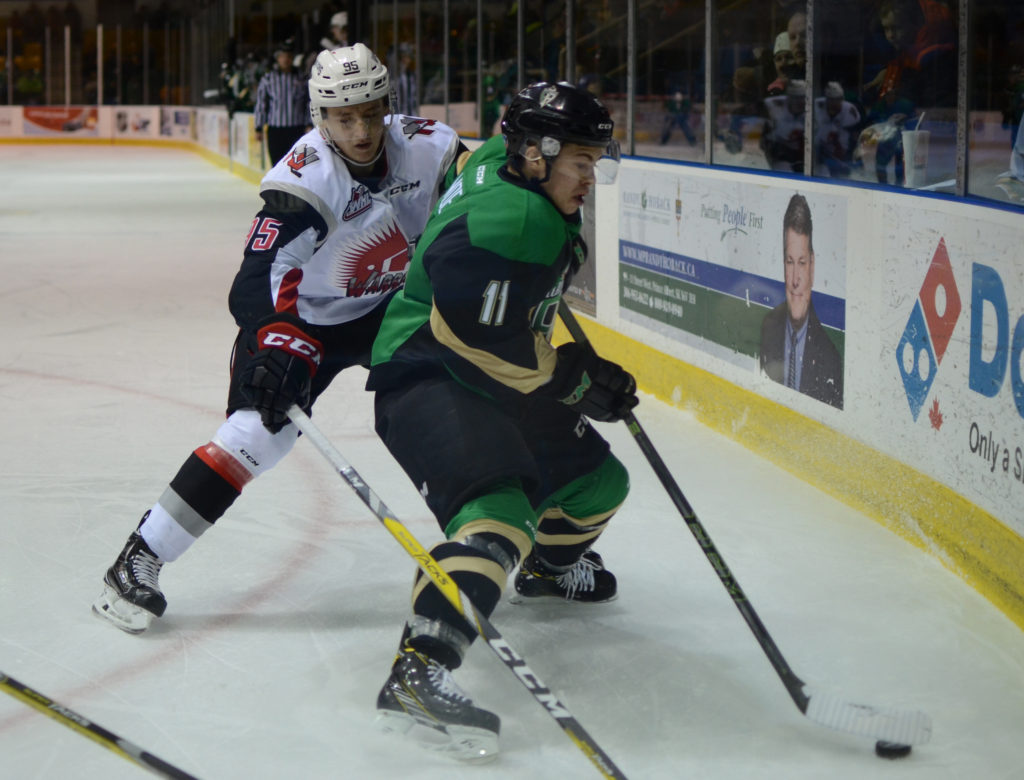 Spencer Moe led the way offensively for the Raiders in Moose Jaw, scoring twice and picking up an assist. Jayden Halbgewachs had a goal and two assists for the Warriors and netted the winner in the shootout.

Raiders rookie Carson Miller opened the scoring with his first of the season at the 7:46 mark of the first period. He potted a rebound on a two-on-one opportunity by fellow rookies Cole Fonstad and Spencer Moe. With 7:47 to play in the first, the Warriors drew even on a Josh Thrower blast from the point.

Early in the second, Noah Gregor and Tanner Jeannot scored in the opening 90 seconds of the frame to put the Warriors ahead 3-1. The Raiders battled back in the period, with Spencer Moe scoring his second of the season with a quick shot from the slot at the 7:22 mark. Then with 3:36 to play in the period, Cavin Leth snapped one past Zach Sawchenko to make it a 3-3 game after 40 minutes.

The Warriors struck quickly in the third when Jayden Halbgewachs found the back of the net 1:11 into the period. The lead held until the 12:03 mark of the final 20 minutes. Moe scored his second of the game, batting his own rebound out of the air and past Sawchenko. The play had to be reviewed, but it was deemed a good goal.

In the overtime period, the Warriors had a golden chance to end the game on a power-play. However, Raiders goaltender Nicholas Sanders robbed Halbgewachs with a beautiful post-to-post save.

After overtime solved nothing, the teams headed to a shootout. After a scoreless first two rounds that saw Simon Stransky and Austin Glover denied, Halbgewachs beat Sanders to put the Warriors ahead. Needing a goal, Sean Montgomery was stopped by Sawchenko to end the game.

Sanders stopped 32 Warrior shots in the loss. Sawchenko made 37 saves to pick up the win.

The Raiders’ next home game is on Tuesday, December 13 against the Edmonton Oil Kings on Santa Anonymous Night presented by the Prince Albert Optimist Club. Fans are encouraged to bring a new, unwrapped present for donation to the Salvation Army. Game time is 7 p.m. Tickets are available at here, at the Raider Office or by calling 306-764-5348.