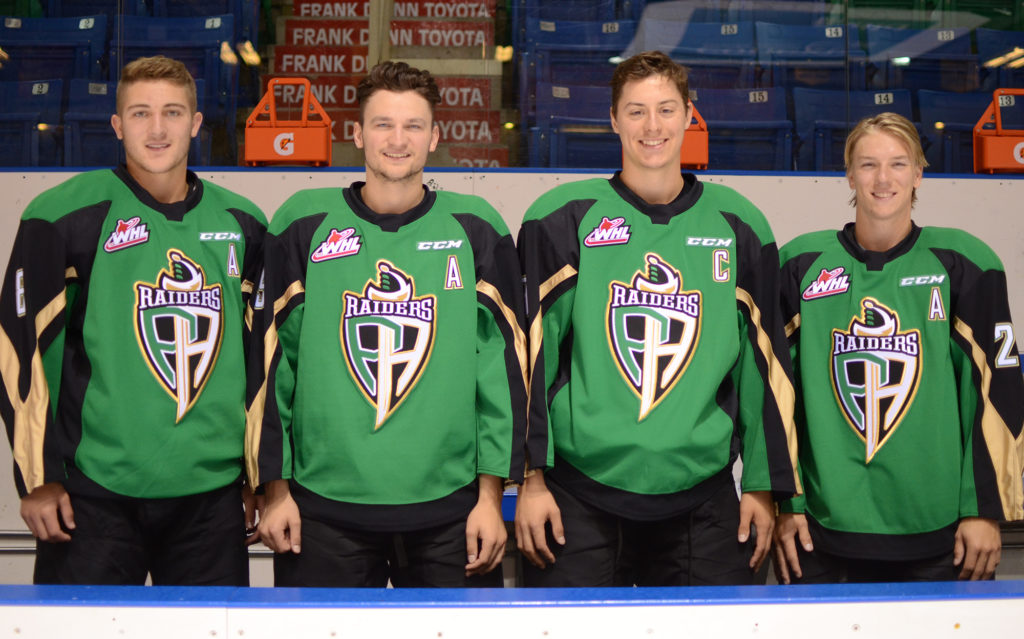 Prince Albert, SK – The Prince Albert Raiders are proud to announce that overager Curtis Miske has been named the 41st captain in team history.

The club also named Parker Kelly, Brayden Pachal, and Jordy Stallard will serve as alternate captains for the 2017-18 season.

“It’s a tremendous honour,” said Miske. “A lot of great names that I’m following up. I’m very humbled to be named the Raiders captain. I’m looking forward to helping out the young guys and getting some stuff going here.”

Miske was acquired by the Raiders on January 2 from the Spokane Chiefs. The Beaumont, AB product had 15 goals and 14 assists in 33 games in Prince Albert during the second half of the season. The 15 goals scored set a new career high for the 6’4, 205-lb forward.

“Curtis has shown exemplary leadership on and off the ice since coming over from Spokane,” said Raiders head coach Marc Habscheid. “He fits the mould of what a Raider captain should be. Along with Parker, Brayden and Jordy, we are very proud and comfortable with our leadership group this season.”

The Raiders drafted Kelly in the seventh round of the 2014 WHL Bantam Draft. Kelly played in all 72 games for the Raiders last season, finishing second in team scoring with 43 points and serving as an alternate captain.

Brayden Pachal joined the Raiders after being acquired from the Victoria Royals on January 9. The 6’1, 193-lb defenceman had three goals and nine assists with the Raiders, including two game-winning goals.

The Raiders acquired Jordy Stallard, a Winnipeg Jets draft pick, on January 10. Stallard, who hails from Brandon, MB, had six goals and four assists with the Raiders before suffering a season-ending injury.

“Any one of those guys could have also been named the captain,” Miske said of the leadership group. “They’re all great leaders. Those guys are definitely going to help me become a better player and those are three guys that are my closest friends on the team and we constantly push each other, so I think we have a really good leadership group here.”

The Raiders continue the pre-season on Friday night when they open a home-and-home series with the Saskatoon Blades at the Art Hauser Centre. Puck drop is 7 p.m. Tickets are $10 for adults and $5 for children. The weekend series concludes on Saturday night in Warman at the Legends Centre in a 7 p.m. start.

The 2017-18 WHL Regular Season begins on Friday, September 22 when the Raiders host the Moose Jaw Warriors. Game time is 7 p.m. Single game tickets are available now at the Raider Office.