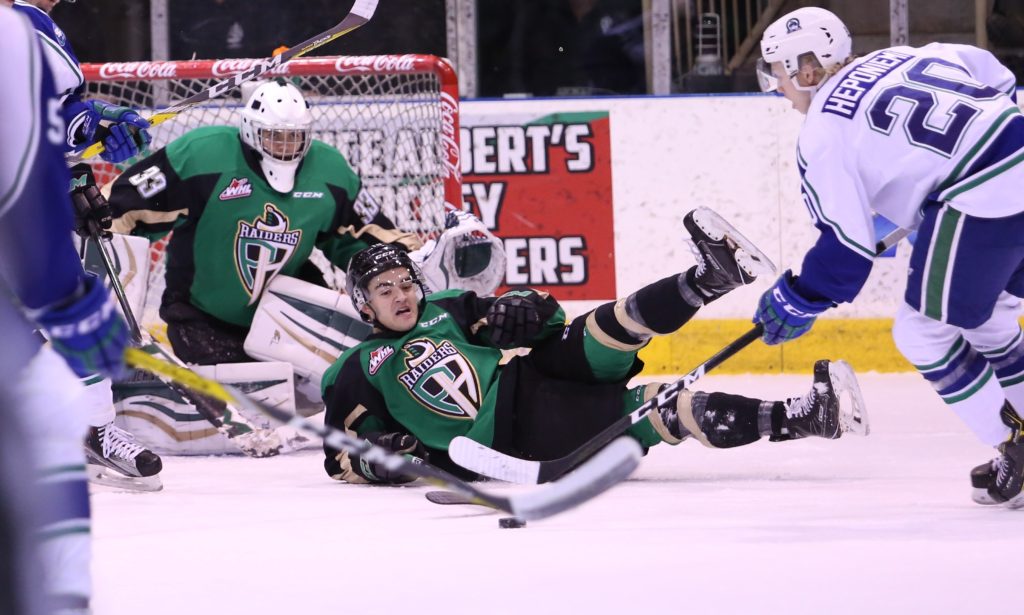 Swift Current, SK – Max Martin scored a power-play goal with 6.7 seconds left in regulation to lift the Prince Albert Raiders (13-35-3-2) to a 3-2 win over the Swift Current Broncos at the Credit Union i-Plex on Sunday afternoon.

The Raiders got on the board early in the first. Cavin Leth batted a rebound out of mid air past Jordan Papirny on a power play at the 3:13 mark. Birthday boy Vojtech Budik picked up an assist on the goal. Before the end of the period, Kaden Elder tied the game, making it a 1-1 contest after 20 minutes.

In the second, the Broncos took the lead on a mid-period goal. Arthur Miller got the last touch on a puck that beat Sanders.

Curtis Miske tied the game again at the 9:07 mark of the third period. He buried a rebound off of a Simon Stransky shot with the man advantage to level the score at 2-2.

That scoreline held until the final minute of the contest. With 20 seconds to play, Lane Pederson was called for boarding when he drove Tim Vanstone head first into the boards. Vanstone got up slowly, but the play gave the Raiders a power play. That set the stage for Martin’s heroics. He snapped a puck through traffic that beat Papirny to win the game.

After the final buzzer, the Raiders and Broncos players on the ice grappled with each other for a few moments before being separated by officials.

Nicholas Sanders picked up his fifth win in six starts on the strength of a 27-save performance. Papirny made 29 saves in the loss for the Broncos.

The Raiders are off until Friday night when they take on the Red Deer Rebels at the Art Hauser Centre. Puck drop is 7 p.m. Tickets are available here, the Raider Office or by calling 306-764-5348.