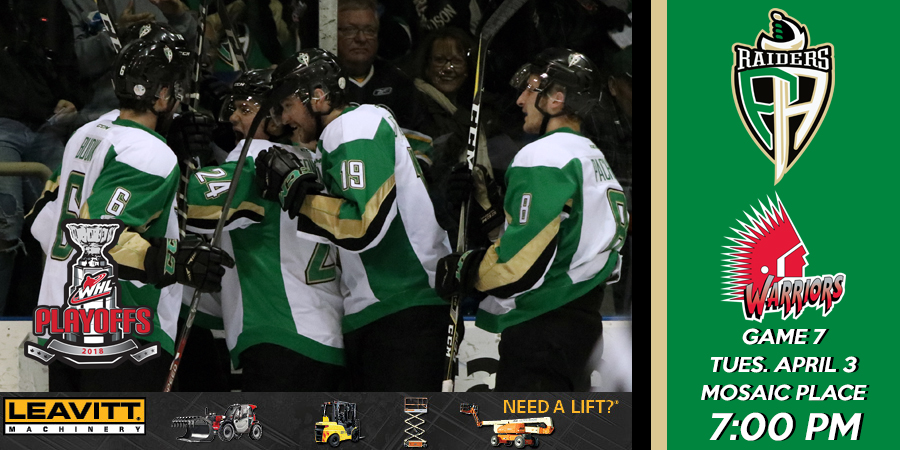 RAIDER REVIEW: The Raiders are back in Moose Jaw tonight for the decisive Game 7 of their opening round series against the Warriors at Mosaic Place. The Raiders pushed the series to the limit with a 5-4 win in Game 6 on Sunday night at the Art Hauser Centre. Cole Fonstad got the scoring started eight minutes into the game. Late in the first, Brayden Burke found the back of the net to tie the game. In the second, Curtis Miske found the back of the net with 7:51 remaining. The Warriors responded with late goals from Burke and Jayden Halbgewachs to put the visitors up 3-2. Before the end of the period, Sean Montgomery scored the tying goal to make it 3-3 after two periods. Early in the third, Regan Nagy put the Raiders ahead with a power-play marker. Just four minutes later, Brett Howden tied the game again with a power-play goal of his own. With 8:26 to play, Fonstad buried his second of the game to put the Raiders ahead for good. Miske finished with three assists to go along with his goal. Ian Scott made 16 saves to pick up the win.

GAME 7 HISTORY: For the first time since 2005, the Raiders will play in a Game 7. That contest was Game 7 of the 2005 Eastern Conference Final against the Brandon Wheat Kings. The Raiders fell 5-1 in Brandon.

HOME COOKING: The Raiders ended a 10-game home losing streak in the WHL Playoffs with their win on Sunday night. Their last win at home was a 5-2 victory over the Saskatoon Blades during the 2011 WHL Playoffs.

CAPTAIN CURTIS: Curtis Miske had a career night on Sunday against the Warriors. The Beaumont, AB product set a career high in both regular season and post-season contests with a four-point effort. His goal and three assists matched his seven-game playoff total while playing for the Spokane Chiefs. With three goals and six assists in this series against the Warriors, Miske has blown past his six points in the regular season against Moose Jaw.

UP NEXT: The winner of tonight’s game will advance to the Eastern Conference semifinals to take on the Swift Current Broncos, who won Game 7 of their opening round series on Monday night at the Credit Union i-Plex.