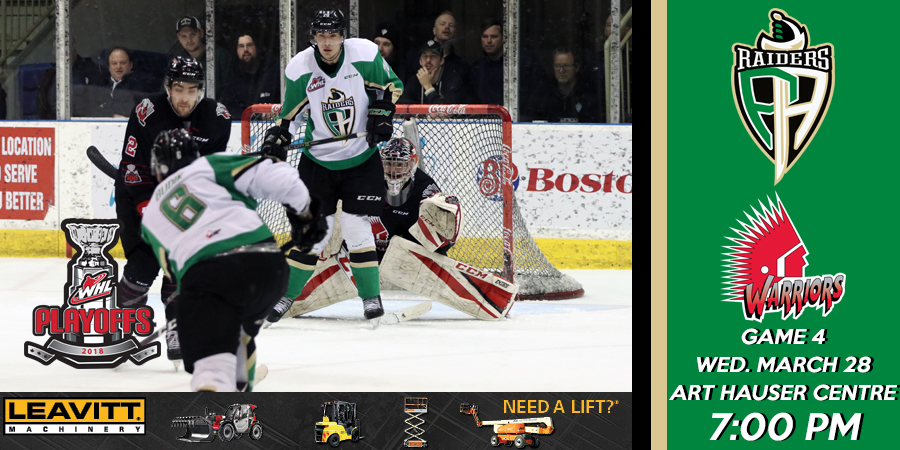 RAIDER REVIEW: The Raiders and Warriors square off for Game 4 of their best-of-seven opening round WHL Playoffs series tonight at the Art Hauser Centre. Last night, the Raiders dropped a 5-4 overtime decision to the Warriors in Game 3, putting Prince Albert behind 2-1 in the series. Curtis Miske got the Raiders going 59 seconds into the contest, but Ryan Peckford tied the game before the end of the first. Midway through the second, Brayden Burke gave the Warriors the lead. The Raiders responded with goals from Vojtech Budik and Jordy Stallard to take a 3-2 lead into the third period. In the final frame of regulation, Justin Nachbaur scored with 2:40 to play to put Prince Albert up 4-2. However, Josh Brook and Brett Howden both scored with the goalie pulled to tie the game and send it to overtime. In the extra frame, Burke buried a cross-crease pass to end the game 19 seconds in. Ian Scott made 40 saves in the loss.

BUDIK STREAKING: Vojtech Budik is getting on another offensive hot streak. With a goal on Tuesday, the Buffalo Sabres pick is on a three-game point streak to start the WHL Playoffs. In the month of March, the blueliner has five goals and three assists in 11 games played.

MISKE MATCHES: With a goal and three assists to start the WHL Playoffs, captain Curtis Miske has matched his post-season highs in goals and assists set during the 2016 WHL Playoffs with the Spokane Chiefs.

UP NEXT: The series returns to Moose Jaw for Game 5 at Mosaic Place on Saturday night. Puck drop is 7 p.m. If necessary, Game 6 will be played on Sunday night at 6 p.m. at the Art Hauser Centre. Tickets will be available for purchase when a game is guaranteed to be played.