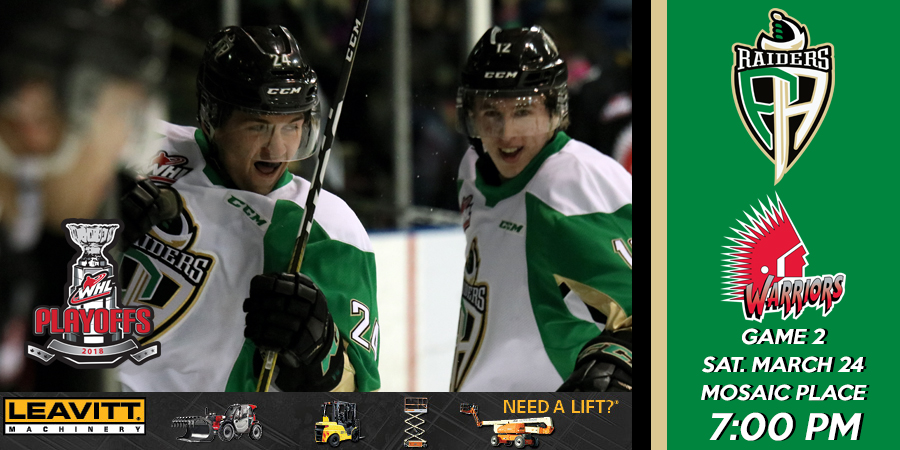 RAIDER REVIEW: The Raiders look to go up two games to none in their best-of-seven opening round series of the WHL Playoffs against the Moose Jaw Warriors tonight. Last night, the Raiders took Game 1 of the series with a 5-3 win over the Warriors. Jordy Stallard got the scoring going for the Raiders with two first-period goals, including one on the power play. After Vince Loschiavo cut into the lead in the second period, Cole Fonstad responded with two goals of his own to put the Raiders ahead 4-1 after 40 minutes. In the third, Regan Nagy made it a four-goal game when he beat Brody Willms on a two-on-one rush. Late in the period, Tristyn DeRoose and Kale Clague found the back of the net to bring the final score back within two. Ian Scott made 35 saves to earn his first career WHL post-season win.

STALLARD STRIKES: Jordy Stallard picked up in the WHL Playoffs right where he left off in the regular season. The Winnipeg Jets prospect scored one of his two goals on Friday night on the power play after leading the Raiders with 17 goals with the man advantage during the regular season. Stallard also recorded the first multi-point post-season game in his WHL career.

PLAYOFF PERFORMERS: Three Raiders making their WHL Playoffs debut made their impact felt on the scoresheet. Cole Fonstad scored twice, including the game-winning goal on Friday. Zack Hayes and Sergei Sapego also picked up their first playoff point with an assist each.

UP NEXT: The series shifts to Prince Albert for Games 3 and 4 of the best-of-seven series between the Raiders and the Warriors on Tuesday and Wednesday night, respectively. Tickets are available at raiderhockey.com, the Raider Office, or by calling 306-764-5348.