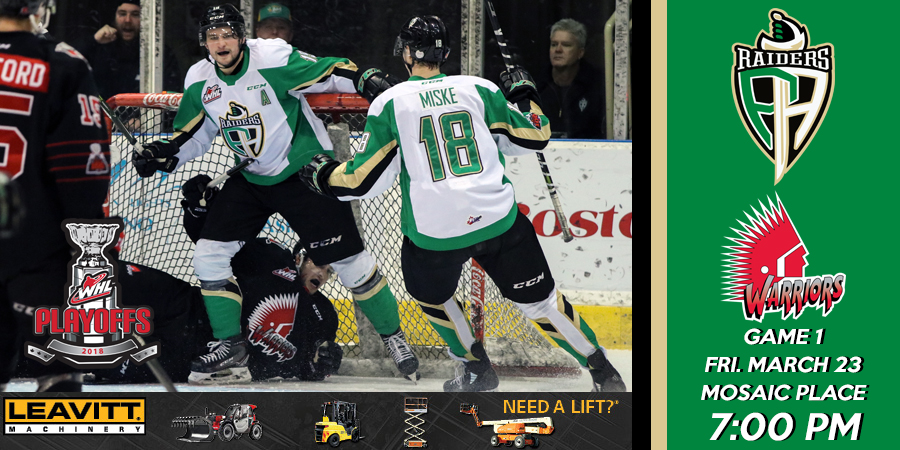 RAIDER REVIEW: The Prince Albert Raiders are back in the WHL Playoffs following a year’s absence as their opening round best-of-seven series against the Moose Jaw Warriors begins tonight at Mosaic Place. The Raiders enter the post-season with points in 11 of their final 13 games, but dropped their final two games of the year against the Saskatoon Blades with nothing on the line

VS. MOOSE JAW: The Raiders and Warriors wrapped up their eight-game season series on March 13. With a 2-1 shootout loss, the Raiders finished the season series with a 3-4-0-1 record against Moose Jaw. The Raiders have also won three of the last four games played against the WHL-leading Warriors.

PLAYOFF REMATCH: This post-season series is a rematch of the last time the Raiders made the WHL Playoffs in 2016. In that matchup, the two-seeded Raiders were upset by the third-place Warriors in the opening round. Only four players – Vojtech Budik, Parker Kelly, Sean Montgomery, and Ian Scott – saw action in that series for a combined 16 games and two points.

EXPERIENCE: The Raiders have four players on their roster with double-digit games played in the playoffs, led by Regan Nagy’s 29 games. The overager from Ogema has five goals and six assists in those games played with the Victoria Royals. Jordy Stallard (22), Kody McDonald (15), and Brayden Pachal (12) are the other players with 10 or more games played.

SAPEGO STRIKES: Sergei Sapego became the third Raiders’ defenceman to score multiple goals in a game when he found the back of the net twice in the final two minutes of Saturday’s game against the Saskatoon Blades. With those two goals, he doubled his total on the season to four to go along with 15 assists in his rookie campaign.

UP NEXT: The Raiders and Warriors square off again on Saturday night in Game 2 of the best-of-seven series. Games 3 and 4 will be played in Prince Albert on Tuesday, March 27 and Wednesday, March 28. For the full series schedule, click here.