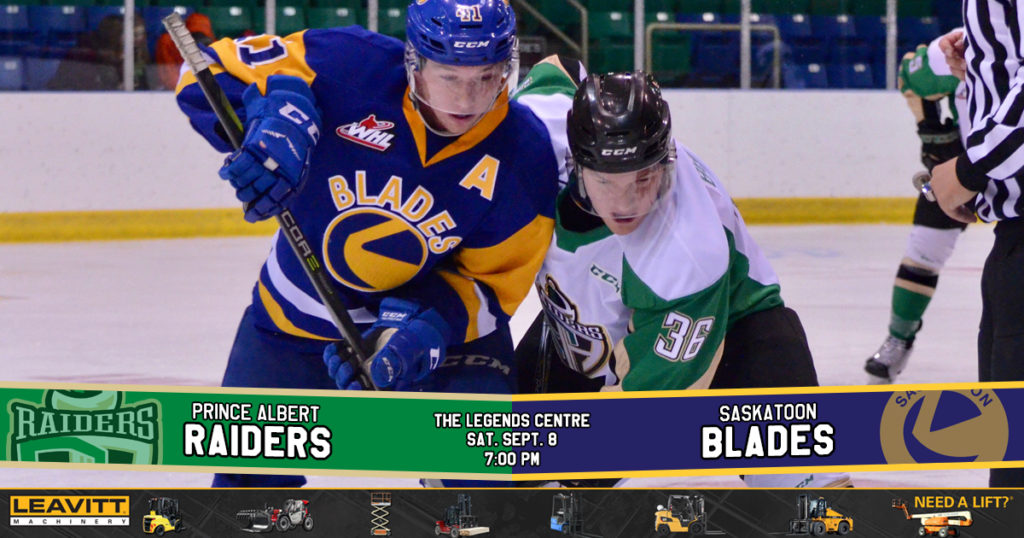 RAIDER REVIEW: The Prince Albert Raiders (0-2-0-0) play their first road game of the pre-season schedule tonight in Warman against Saskatoon Blades (4-0-0-0) at The Legends Centre. On Thursday, these two teams clashed at the Art Hauser Centre in a game that saw the Raiders fall 6-3 to their Hwy. 11 rivals. Max Martin, Carson Miller, and Brett Leason found the back of the net for the Raiders in the loss. Donovan Buskey made his first appearance with the Raiders, stopping 17 shots.

MILLER FINDING SCORING TOUCH: After scoring just once last season, Carson Miller has already made an impact this season. The 21st overall pick in the 2015 WHL Bantam Draft has two goals this pre-season, including one on Thursday night against the Blades.

PROTAS PERFORMING: Raiders import forward Aliaksei Protas has adjusted well to the WHL game. The Belarusian has three assists in his first two pre-season contests. Protas picked up a pair of assists on Thursday night against the Blades. The 6’5, 192-lb forward was drafted 26th overall in June’s CHL Import Draft.

QUICK STRIKE OFFENCE: Max Martin and Carson Miller scored 22 seconds apart on Thursday night, both of which came on a five-on-three power play. They were the fastest consecutive exhibition goals scored since the 2012 WHL Pre-season when the Raiders eclipsed that time twice. On Sept. 7, 2012, Tim Vanstone and Luke Mahua scored 15 seconds apart. On the following night, Logan McVeigh and Shane Danyluk’s goals were separated by just 17 seconds.

NEXT UP: The Raiders head to Regina to take on the Pats at the Brandt Centre on Friday night at 7 p.m. The game will be broadcasted on 900 CKBI. The next Raiders’ home game is on Saturday as they close out the preseason schedule against the Blades. Puck drop is 7 p.m. Then, the Raiders make the transition to the regular season for the home opener of the 2018-19 year against the Pats on Friday, September 21. The game begins at 7 p.m.