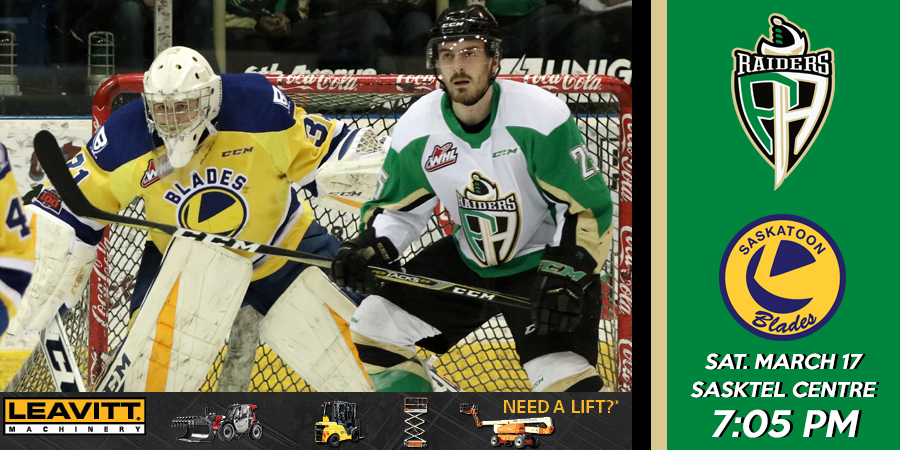 RAIDER REVIEW: The Raiders (33-25-9-4) wrap up their regular season schedule tonight in Saskatoon in the second leg of a home-and-home series against the Blades (34-33-3-1). Last night, the Raiders dropped a 2-1 decision to the Blades at the Art Hauser Centre. Parker Kelly got the scoring going with a shorthanded goal late in the first period in an intense, physical contest. The lead held until the final five minutes of the game when the Raiders ran into penalty trouble. Max Gerlach scored on a two-man advantage, followed shortly by Chase Wouters on another power play to give Saskatoon the win. Ian Scott made 20 saves in a losing effort.

VS. SASKATOON: This is the final meeting of the year between the Raiders and the Blades. So far, the Raiders have a 2-5 record against their Highway 11 rivals.

BATTLING THE BLADES: Parker Kelly has seven goals in the season series against the Saskatoon Blades after he recorded a shorthanded marker on Friday night. The Ottawa Senators prospect now has 29 goals on the year.

IRONMAN STREAK SNAPPED: Zack Hayes missed the first game of his WHL career on Friday night when he was given a night off to rest for the playoffs. The Calgary, AB product had played in 143 consecutive games for the Raiders. A ninth-round pick of the Raiders in the 2014 WHL Bantam Draft, Hayes has five goals and 24 assists in his WHL career.

POINT STREAK OVER: The Raiders had their 11-game point streak snapped on Friday night. Over that span, the Raiders earned 20 points. Since that streak started, the Raiders made up the eight-point deficit to overtake the Blades for the final wild card spot in the Eastern Conference.

NEXT UP: The Raiders head open their first round WHL Playoff series against the Moose Jaw Warriors on Friday, March 23 in Moose Jaw. Games 3 and 4 will be played in Prince Albert on Tuesday, March 27 and Wednesday, March 28. For the full series schedule, visit raiderhockey.com.