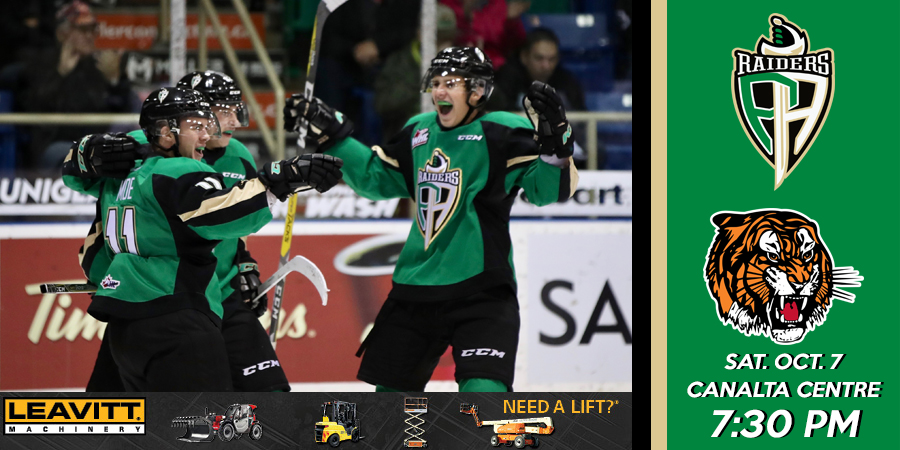 RAIDER REVIEW: The Raiders close out the weekend road trip tonight in Medicine Hat against the Tigers at the Canalta Centre. Last night, the Raiders fell 4-1 to the Hurricanes in Lethbridge at the Enmax Centre. Sean Montgomery scored the Raiders’ lone goal of the game midway through the second period. Curtis Meger made his second consecutive start, stopping 25 of 28 shots faced.

VS. MEDICINE HAT: This is the second game of the year between the Raiders and the Medicine Hat Tigers. In the last meeting, the Raiders doubled up the Tigers 4-2 at the Art Hauser Centre.

PILING UP POINTS: Devon Skoleski keeps getting his name on the scoresheet. The overage forward assisted on Sean Montgomery’s goal on Friday night, extending his point streak to four games.

PROSPECT WATCH: Five Prince Albert Raiders picks from the 2017 WHL Bantam Draft will take the ice for their respective provinces at the 2017 WHL Cup, formerly known as the Western Canada U16 Challenge Cup. Kaiden Guhle and Ozzy Wiesblatt will suit up for Team Alberta; Jakob Brook and Evan Herman will play for Team Manitoba; and Davin Griffin will put on the green sweater for Team Saskatchewan. The 2017 WHL Cup opens on Wednesday, October 18.

NEXT UP: The Raiders return to the Art Hauser Centre on Friday, October 13 to take on the Memorial Cup host Regina Pats, beginning a stretch of three games in three days. Game time is 7 p.m. Tickets are available at raiderhockey.com, the Raider Office, or by calling 306-764-GAME. After Regina, the Raiders head to Brandon for an evening game on Saturday and an afternoon tilt on Sunday.