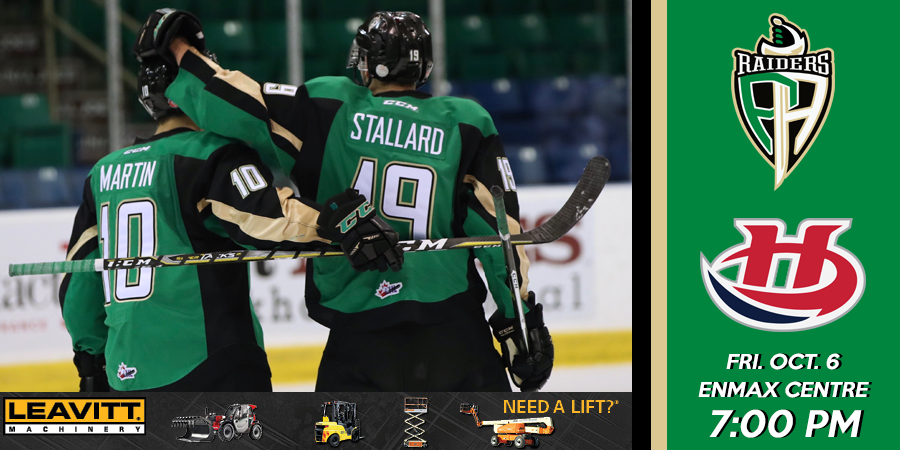 RAIDER REVIEW: The Raiders (2-2-0-0) open a weekend road trip through Alberta tonight in Lethbridge against the Hurricanes (2-2-0-0) at the Enmax Centre. In their last game, the Raiders doubled up the Medicine Hat Tigers 4-2 at the Art Hauser Centre. Cole Fonstad, Devon Skoleski, and Parker Kelly scored, while Curtis Miske sealed the game with an empty-net tally. Curtis Meger got his first career WHL start and picked up his second career win with a 30-save performance.

VS. LETHBRIDGE: This is the first meeting of the year between the Raiders and the Lethbridge Hurricanes. Last year, the Hurricanes swept the four-game season series. In the last meeting, Matt Alfaro and Tyler Wong each had three-point nights in a 5-2 Hurricanes win over the Raiders at the Art Hauser Centre.

STREAKING: Parker Kelly and Devon Skoleski have been on a roll to start the season. Both players are currently riding three-game goal-scoring streaks. Kelly has a goal in every game played this season, while Skoleski scored the first Raiders’ goal of the season on Sept. 23 in Moose Jaw.

FRIDAY FEELING: The Raiders picked up six of their 21 wins on Friday’s last year, the most of any day of the week.

SHOOTING GALLERY: The Raiders have outshot their opponents in three of the first four games of the season, coming away with a 2-1 record in those games.

NEXT UP: The Raiders finish off their weekend road trip on Saturday night in Medicine Hat against the Tigers at the Canalta Centre. The next Raiders’ home game is on Friday, October 13 when the Memorial Cup host Regina Pats visit the Art Hauser Centre for the first time this season. Game time is 7 p.m. Tickets are available at raiderhockey.com, the Raider Office, or by calling 306-764-GAME.