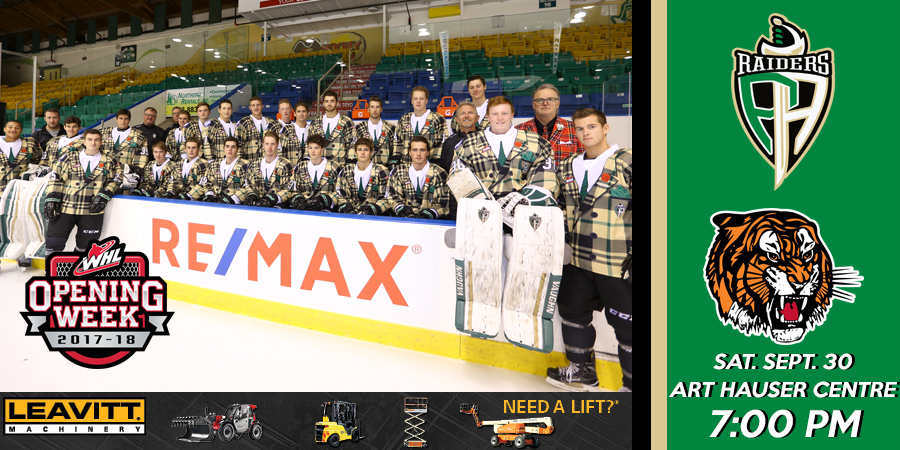 RAIDER REVIEW: The Raiders host the Medicine Hat Tigers on WHL Suits Up with Don Cherry to Promote Organ Donation – Presented By RE/MAX Night tonight in the second game of a weekend homestand. On Friday, the Raiders picked up their first win of the year with a 6-5 overtime victory against the Calgary Hitmen at the Art Hauser Centre. Parker Kelly, Devon Skoleski, Max Martin, Jordy Stallard, and Spencer Moe all scored during regulation. Vojtech Budik found the back of the net in overtime to give the Raiders the win. Curtis Meger came in to the game midway through the second period. He made six saves to earn his first career WHL win.

VS. MEDICINE HAT: This is the first meeting of the year between the Raiders and the Medicine Hat Tigers. Last year, the Tigers swept the four-game season series. In the last meeting, Steven Owre scored 31 seconds into overtime to give the Tigers a 6-5 win at the Art Hauser Centre.

SKOLESKI SCORING: Devon Skoleski has found the scoring touch since coming to Prince Albert. Including the pre-season, the overage forward has a goal in three of the last four Raiders’ games. He also notched a shootout winner on his birthday in Regina on Sept. 15. Skoleski, who was picked up on waivers, had 14 goals and 20 assists in 65 games for the Everett Silvertips last season.

FIRSTS: Two Raiders recorded firsts on Friday night. Tyler Lowe, a fifth-round pick in the 2015 WHL Bantam Draft, played in his first career WHL game. Also, Curtis Meger stepped between the pipes for the first time in the WHL. He also earned his first career win after the Raiders erased a one-goal deficit to start the third period.

WINNER WINNER: Vojtech Budik scored his second career game-winning goal on Friday night. His first came on Oct. 13, 2015 in Portland against the Winterhawks in a 4-0 win. It was also the Buffalo Sabres’ prospect’s first career WHL goal.

NEXT UP: The Raiders the road next weekend for a two-game jaunt into Alberta. On Friday, the Raiders are in Lethbridge to face off against the Hurricanes in a 7 p.m. start. On Saturday, the Raiders tangle with the Tigers in Medicine Hat in a rematch of tonight’s game. Puck drop is 7:30 p.m. The Raiders return to the Art Hauser Centre on Friday, October 13 to take on the Memorial Cup host Regina Pats. Game time is 7 p.m. Tickets are available at raiderhockey.com, the Raider Office, or by calling 306-764-GAME.