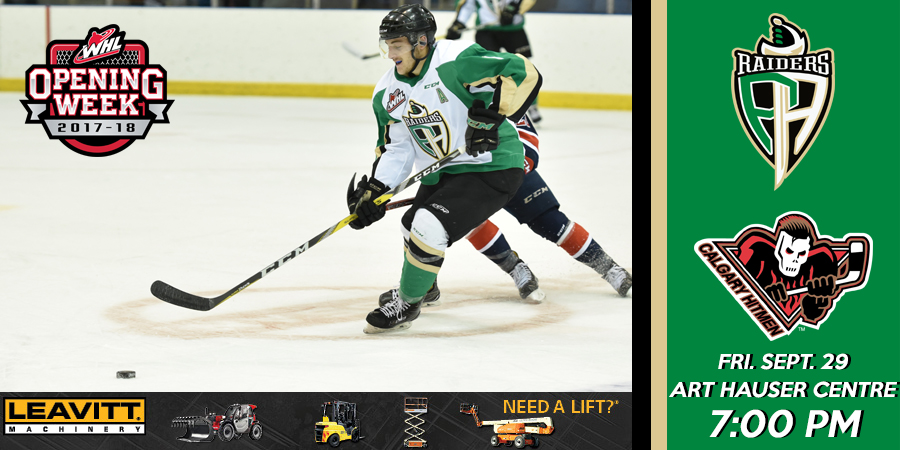 RAIDER REVIEW: The Raiders continue their search for their first win of the season tonight as the Calgary Hitmen visit the Art Hauser Centre. Last Saturday, the Raiders dropped their second game of the season 7-3 to the Warriors in Moose Jaw at Mosaic Place. Jordy Stallard (1g-1a) and Cole Fonstad (2a) led the way for the Raiders’ offensively. Parker Kelly returned from Ottawa’s training camp fresh off signing an entry-level contract to pick up his first point of the year with a third-period goal. Nicholas Sanders got the start in goal, stopping 23 shots in a losing effort.

VS. CALGARY: This is the first meeting of the season between the Raiders and the Calgary Hitmen. Last year, the Raiders and Hitmen split the season series. Each team earned one of their two wins in overtime. In the last meeting, Brayden Pachal scored 1:52 into overtime to give the Raiders a 3-2 win at the Scotiabank Saddledome.

POINTS RACE: Jordy Stallard and Cole Fonstad are currently tied for first in the Raiders’ scoring race. Both players had two-point performances in Saturday’s 7-3 loss to the Warriors in Moose Jaw.

STREAKING STALLARD: Speaking of Stallard, he has points in seven of his 10 games with the Raiders after being acquired from the Hitmen at last season’s WHL Trade Deadline. The Winnipeg Jets prospect has seven goals and five assists in that span, including two goals against his former team.

NEXT UP: The Raiders are back at it tomorrow night as the Medicine Hat Tigers come to town for WHL Suits Up with Don Cherry to Promote Organ Donation Night presented by RE/MAX. The Raiders will be holding a silent auction for Don Cherry-themed jerseys worn on this night up until five minutes into the third period. All proceeds from the jersey auction will go to the Saskatchewan branch of The Kidney Foundation of Canada. Both games begin at 7 p.m. Tickets are available at raiderhockey.com.