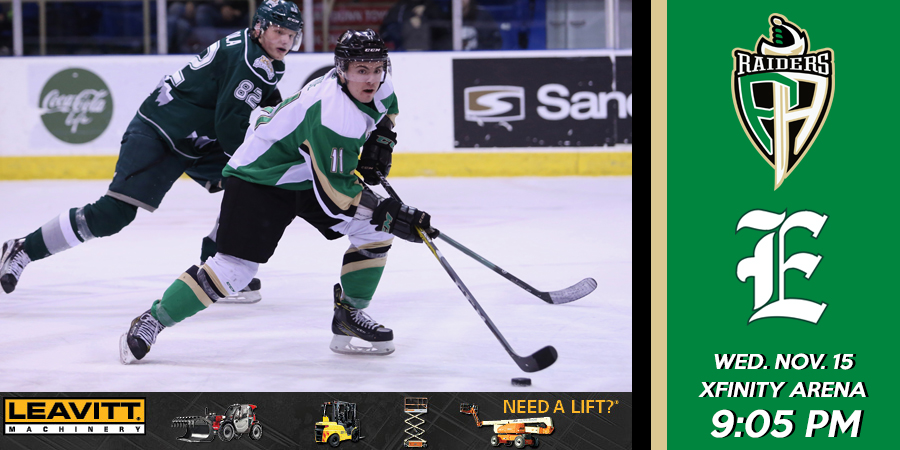 RAIDER REVIEW: The Raiders (9-7-3-0) start the second half of their six-game road trip tonight in Everett against the Silvertips (8-10-1-1) at XFINITY Arena. Last night at the ShoWare Center, the Raiders came from behind to knock off the Seattle Thunderbirds 6-4. Captain Curtis Miske scored twice in the third period and assisted on Jordy Stallard’s game-winning goal to lead the offensive effort. Spencer Moe, Brett Leason, and Parker Kelly also found the back of the net. Ian Scott made 26 saves for the Raiders to earn his sixth win of the season.

MULTI-POINT MAN: Curtis Miske’s three-point night was the fourth time this season that the Raiders captain recorded a multi-point night. He is halfway to his total of eight multi-point games from last season, six of which came after he was acquired by the Raiders from the Spokane Chiefs.

FAMILIAR FACE: Fresh off his 150th career WHL game, Devon Skoleski returns to Everett tonight. The 20-year-old forward was picked up on waivers by the Raiders from the Silvertips in the off-season. Skoleski had 23 goals and 30 assists in 131 games with Everett.

STRIKING FIRST: When Spencer Moe opened the scoring in Tuesday’s game, it marked the ninth time this season that the Raiders have scored first. The Raiders have won seven of those games, while another was an overtime loss.

MAGIC NUMBER: The Raiders’ magic number has been four this season, as in four goals. All nine of the Raiders’ wins this season have come when the team has scored four our more goals for a record of 9-0-2-0.

COMEBACK KIDS: The Raiders earned their third win of the year when trailing after the second period, which is second best in the league. Prince Albert trails only the Red Deer Rebels in that category this season. The Raiders hold a record of 3-5-1-0 when facing a deficit after two periods.

NEXT UP: The Raiders head to Kennewick on Friday night to take on the Tri-City Americans (12-5-2-0) at the Toyota Center. The next Raiders’ home game is on Friday, November 24 against the Swift Current Broncos on 80s Night Presented By Canadian Tire at the Art Hauser Centre.  Tickets are available at raiderhockey.com, the Raider Office, or by calling 306-764-GAME.