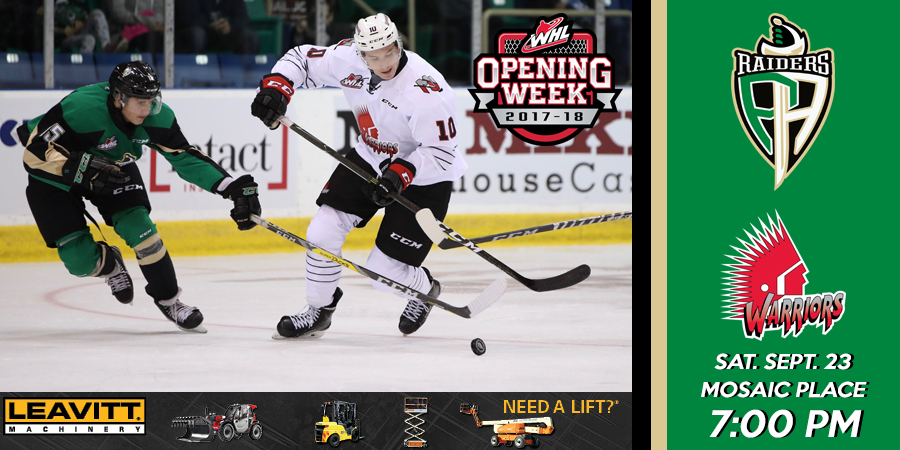 RAIDER REVIEW: The Raiders look to rebound tonight following a 3-0 loss in their home opener to the Moose Jaw Warriors at the Art Hauser centre on Friday night. Brayden Burke, Jett Woo, and Justin Almeida all scored the Warriors in the win. Ian Scott took the loss in goal for the Raiders, making 26 saves before leaving early in the third period. Brody Willms stopped all 21 shots fired his way to pick up his first shutout of the season.

VS. MOOSE JAW: This is the second meeting of the season between the Raiders and the Moose Jaw Warriors.

SHUTOUT STATS: It has been a while since the Raiders have been shut out by the opposition. The last time the Raiders were blanked was on Dec. 30, 2016 in an 8-0 loss to the Regina Pats – a span of 33 games. Despite finishing last in the East Division last season, the Raiders were only shut out three times.

STREAK SNAPPED: Jordy Stallard had his four-game goal-scoring streak snapped on Friday night. His last goal came on January 22, 2017 against the Calgary Hitmen. In that game, the Winnipeg Jets draft pick suffered a season-ending injury.

MAKING THEIR DEBUTS: Two Raiders played in their first WHL games on Friday night at the Art Hauser Centre – Eric Pearce and Brock Sottile. The two Raider rookies combined for a minus-two rating and two penalty minutes. Pearce was a second-round pick of the Raiders in the 2016 WHL Bantam Draft. Sottile was acquired by the Raiders from the Spokane Chiefs earlier this week.

NEXT UP: The Raiders return home to the Art Hauser Centre for games on Friday and Saturday night. On Friday, the Calgary Hitmen visit Prince Albert. Then on Saturday, the Medicine Hat Tigers are in town for WHL Suits Up with Don Cherry to Promote Organ Donation Night presented by RE/MAX. Both games begin at 7 p.m. Tickets are available at raiderhockey.com.