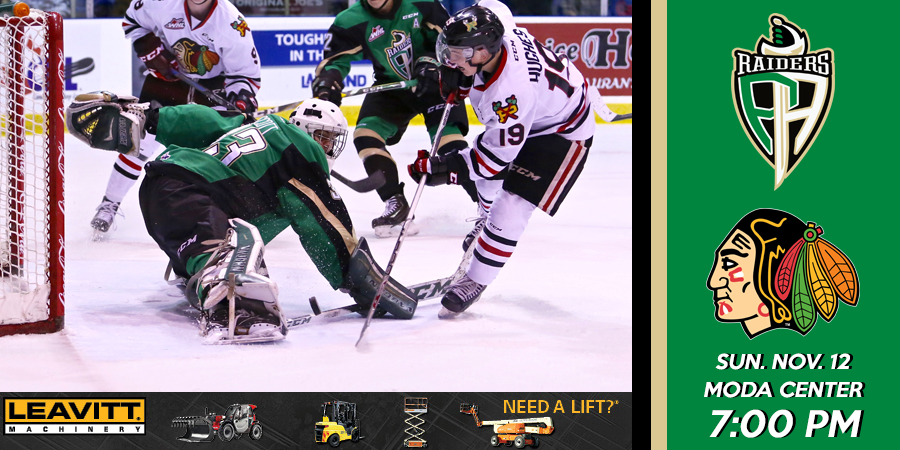 RAIDER REVIEW: The Raiders (8-6-3-0) open the American portion of their six-game road trip tonight in Portland against the Winterhawks (13-4-0-0). On Friday, the Raiders started their road trip in Cranbrook with a  5-3 win over the Kootenay ICE on the strength of four first-period goals. Justin Nachbaur scored twice, while Sean Montgomery, Cole Fonstad, and Spencer Moe also found the back of the net. Ian Scott made 36 saves to pick up the win.

VS. PORTLAND: This is the only meeting of the year between the Raiders and the Winterhawks this season. Last year, the Raiders lost their only game against the Winterhawks 5-3 at the Art Hauser Centre. Cody Glass led the way for Portland with two goals and an assist. Cole Fonstad scored his first career WHL goal in the loss. In the Raiders’ last trip to Portland, Vojtech Budik had a goal and Rylan Parenteau stopped all 36 shots he faced in a 4-0 shutout win.

NACHBAUR NETS A PAIR: Rookie forward Justin Nachbaur recorded his first career multi-point game on Friday night in Cranbrook against the Kootenay ICE. The Cross Lake, MB product had two goals and an assist en route to earning the game’s first star. Nachbaur, who scored his first WHL goal on Nov. 3 against the Swift Current Broncos, now has points in two of the last three games.

STILL STREAKING: With a pair of assists on Friday night, Jordy Stallard extended his point streak to 10 games. The Winnipeg Jets draft pick leads the team in goals with 13 and is tied with Cole Fonstad for the team lead in assist with 17.

POWER-PLAY POINTS: With a power-play goal on Friday night, Cole Fonstad continues to be tied with Jordy Stallard for the team lead in power-play points. Both players have nine points with the man advantage this season. Stallard has six goals and three assists, while Fonstad has a goal and eight helpers.

RHINEHART EARNS SILVER: Rhett Rhinehart and Canada Red took home a silver medal from the World Under-17 Hockey Challenge on Saturday night in Dawson Creek, BC. Rhinehart’s side fell 6-4 to the United States in Saturday night’s gold-medal game. The Lloydminser, AB product had an assist and two penalty minutes in six games for Canada Red at the tournament. Rhinehart turns 16 later this month.

NEXT UP: The Raiders continue their road trip on Tuesday night against the Seattle Thunderbirds (9-6-1-1) at the ShoWare Center. The next Raiders’ home game is on Friday, November 24 against the Swift Current Broncos on 80s Night Presented By Canadian Tire at the Art Hauser Centre.  Tickets are available at raiderhockey.com, the Raider Office, or by calling 306-764-GAME.