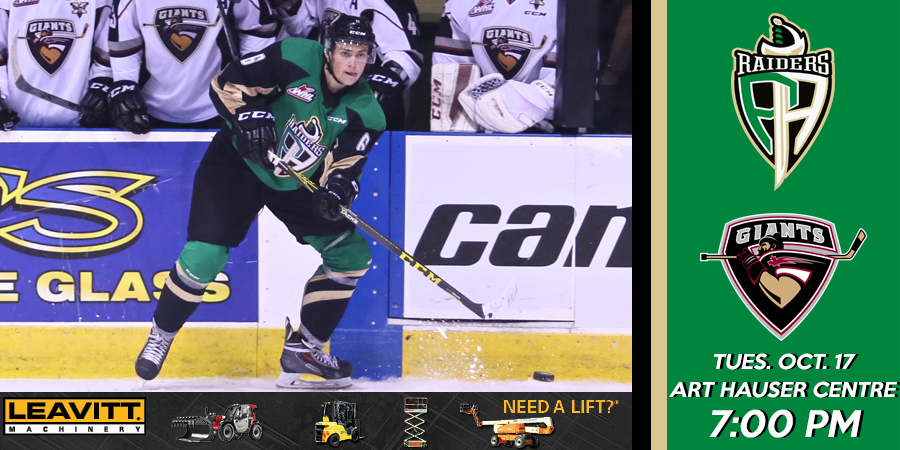 RAIDER REVIEW: The Raiders open a four-game homestand tonight when the Vancouver Giants (2-4-1-1) make their biennial trip to Prince Albert. In the Raiders’ last outing, Cole Fonstad had two goals and an assist in a 6-5 overtime loss to the Brandon Wheat Kings on Sunday afternoon at Westman Place. Sean Montgomery also scored twice, while Curtis Miske chipped in a power-play goal. Curtis Meger stopped 25 shots in the loss.

VS. VANCOUVER: This is the only meeting of the season between the Raiders and the Vancouver Giants. Last year, the couldn’t climb out of an early hole in a 5-3 loss to the Giants at the Langley Events Centre. In Vancouver’s last trip to Prince Albert, the Raiders defeated the Giants 5-4 in a shootout.

FONSTAD’S ON FIRE: Raiders sophomore forward Cole Fonstad has been heating up over the last two weeks. The 17-year-old from Estevan has recorded three points in three of the last four games. He had a fantastic showing in Brandon, picking up three goals and three assists during the two games against the Wheat Kings. As a rookie, Fonstad only had one multi-point performance – a two-point night (1g-1a) against the Vancouver Giants.

MILESTONE WATCH: Raiders centre Jordy Stallard played in his 175th career WHL game on Sunday afternoon against his hometown Brandon Wheat Kings. The Winnipeg Jets prospect has 46 goals and 76 assists in his WHL career, including 11 goals and 14 assists in 17 games with the Raiders. Two other Raiders are approaching milestones – captain Curtis Miske is four games away from 200 career WHL contests and Parker Kelly is two games away from his 150th.

HOME AT THE HAUSER: Raiders goaltender Curtis Meger has been stellar at the Art Hauser Centre this season. The 19-year-old netminder has a 1.95 goals-against average and a 0.931 save percentage in his three home appearances.

NEXT UP: The Raiders continue their homestand on Saturday night when the rival Saskatoon Blades (3-5-0-0) travel up Hwy 11 for the first time this season to visit the Art Hauser Centre. Puck drop is 7 p.m. Tickets are available at raiderhockey.com, the Raider Office, or by calling 306-764-GAME.