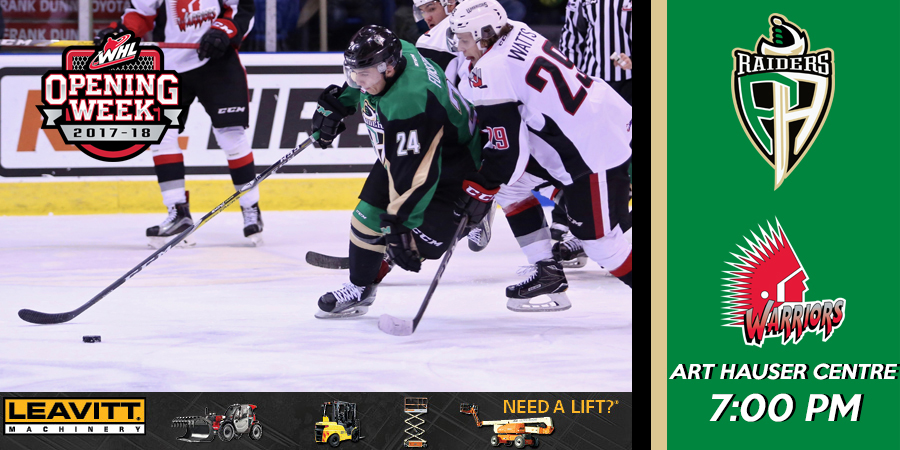 RAIDER REVIEW: The Raiders wrapped up the WHL Pre-season with a 5-1 loss to the Regina Pats on Saturday night at the Art Hauser Centre. Devon Skoleski scored the lone goal of the game for the Raiders. Nicholas Sanders and Curtis Meger combined to make 21 saves on 26 attempts. The Raiders finished the pre-season with a 2-3 record.

VS. MOOSE JAW: This is the first meeting of the season between the Raiders and the Moose Jaw Warriors. Last year, the Raiders had a 3-3-0-2 record against the Warriors. In the final meeting between the teams last season, Simon Stransky scored the overtime goal in a 3-2 Raiders road win.

PRE-SEASON WRAP UP: Sean Montgomery and D-Jay Jerome led the way for the Raiders with four points each. Montgomery scored four goals, while Jerome had a goal and three assists. Curtis Meger earned both of the Raiders’ wins in the exhibition contests.

COMING HOME: Defenceman Vojtech Budik, goaltender Ian Scott, and forward Jordy Stallard have all come back from their respective NHL camps. Scott returned from Toronto early in the week, while Budik and Stallard both arrived back in Prince Albert on Thursday.

SIGN ON THE LINE: Raiders winger Parker Kelly signed a three-year entry-level contract with the Ottawa Senators on Tuesday morning. Kelly, a seventh-round pick of the Raiders in the 2014 WHL Bantam Draft, went undrafted in this summer’s NHL Entry Draft. He was invited to Ottawa’s summer development camp, as well as their rookie and main training camps.

NEXT UP: The Raiders finish off the season-opening home-and-home series with the Moose Jaw Warriors on Saturday night in the Friendly City. Puck drop at Mosaic Place is scheduled for 7 p.m. The next Raiders’ home game is on Friday, September 29 against the Calgary Hitmen. Game time is 7 p.m. Tickets are available at the Raider Office or at raiderhockey.com.