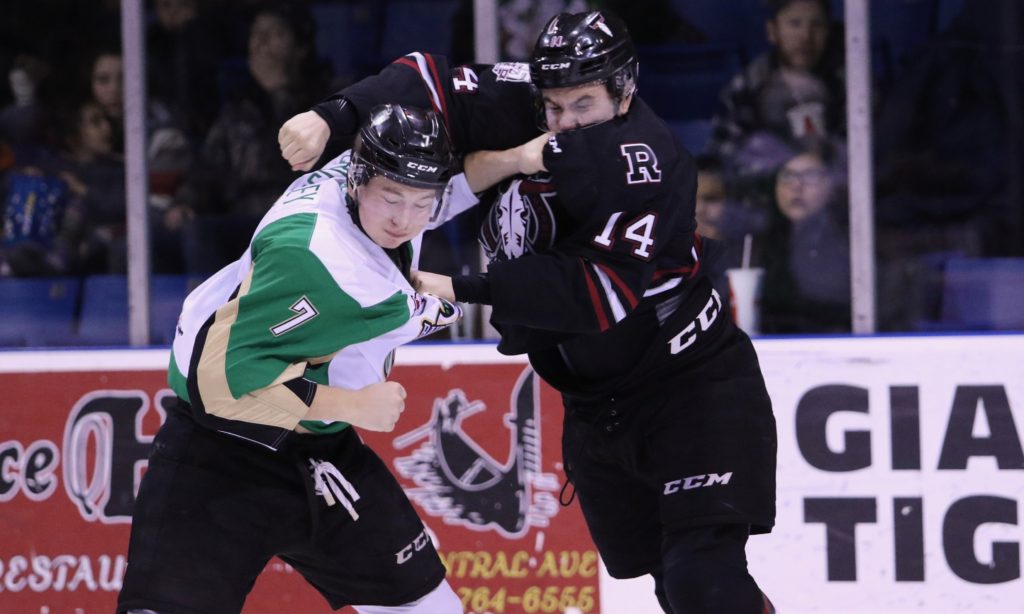 The Raiders took the lead twice in the game, but were unable to put the Rebels away for good.

In the first, the Raiders opened the scoring at the 10:04 mark. Parker Kelly buried his sixth of the season when he picked the corner on Riley Lamb. Three minutes later, Tim Vanstone tallied his seventh goal after he buried his own rebound.

The Rebels rallied early in the second period. Alexander Alexeyev scored on a 5-on-3 power play to bring the Rebels within one. Just after the other Raider penalty expired, Lane Zablocki scored to make it a 2-2 game.

That score held until 48 seconds into the third period. Curtis Miske broke the tie with his second as a Raider to make the score 3-2. At the 7:01 mark, Michael Spacek scored an unassisted shorthanded goal to tie the game at 3-3. Late in the third, Tim Vanstone was assessed a goaltender interference penalty. On the ensuing power play, Adam Musil scored to give the Rebels a 4-3 advantage with 3:08 remaining. The Raiders pulled Scott for the extra attacker, but were unable to find the equalizer.

Scott stopped 31 shots in the loss, including two breakaway opportunities early in the game. Riley Lamb picked up the win with a 33-save performance.

The Raiders open a home-and-home series with the Regina Pats tomorrow night in the Brandt Centre. The return match is on Sunday afternoon at the Art Hauser Centre. Puck drop is 4 p.m. Kids wearing their minor hockey jerseys will get into the game for free with the purchase of an adult ticket. Tickets are available here, the Raider Office or by calling 306-764-5348.