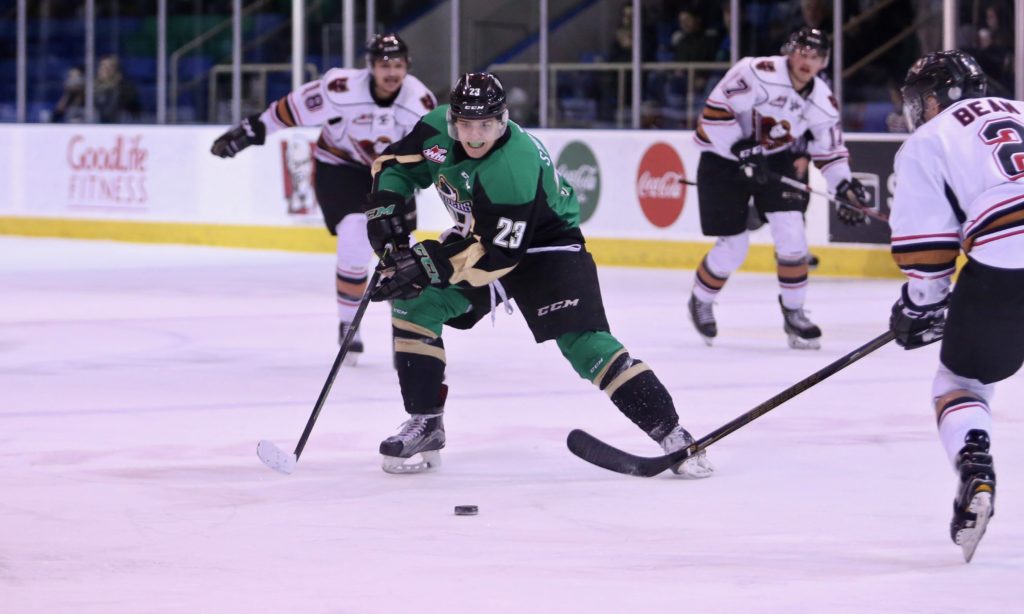 Jordy Stallard scored a power-play goal with 4:13 remaining to give the Hitmen the win, snapping the puck past Raiders goaltender Ian Scott.

Following a scoreless first period, Carsen Twarynski got the Hitmen on the board on a delayed penalty when he beat Scott at the 2:29 mark of the second. About two minutes later, the Raiders tied the game. Nick Heid’s blast from the point was deflected in front of the net by Sean Montgomery for his eighth goal of the season. Shortly after, Beck Malenstyn restored the Hitmen’s lead. Late in the period, Simon Stransky tied the game again. He pounced on a rebound from a Vojtech Budik shot and snapped it past Cody Porter.

The two teams played a tight third period until Sean Montgomery took a delay of game penalty on a faceoff. That gave Calgary a power-play chance on which they ultimately capitalized.

Scott took the loss for the Raiders, but finished the game with 39 saves. Porter stopped 22 shots to pick up the win.

The Raiders return to the ice on Friday night against the Moose Jaw Warriors on Teddy Bear Toss night. Fans are asked to put their bears into plastic bags before throwing them onto the ice. Tickets are available at raiderhockey.com, at the Raider Office or by calling 306-764-5348.

RAIDER NOTES: Forward Kolby Johnson was suspended by the league for four games prior to Tuesday’s matchup for a checking to the head penalty in Saturday’s game in Regina.