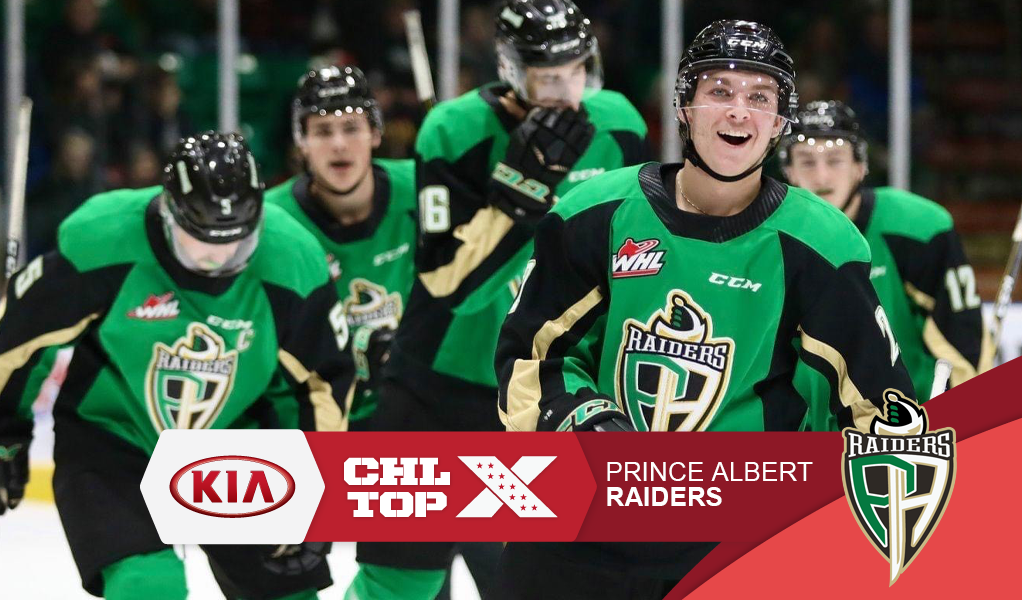 The Prince Albert Raiders are ready to drive home the dagger.

Having clinched top spot in the WHL’s East Division with 82 points in 64 games when play paused last season, the Raiders enter the new campaign recharged and recognized as an honourable mention in the preseason edition of the Kia CHL Top-10 Rankings.

Weekly editions to resume when each of @TheWHL, @OHLHockey and @QMJHL are in action. pic.twitter.com/QK07wgYCWH

Icing a lineup decorated with NHL drafted talent, that conversation begins up front with third-year centre Aliaksei Protas, a 2019 third-round selection of the Washington Capitals who impressed last season to the tune of 80 points counting 31 goals and 49 assists through 58 contests, good for ninth place in the league-wide scoring race. In all, that performance was highlighted by a phenomenal 12-game point streak midseason in which the Belarusian-born forward racked up eight goals and 13 assists for 21 points.

Also up front is newly minted San Jose Sharks prospect Ozzy Wiesblatt who heard his name called 31st overall in the 2020 NHL Draft. A budding right-wing, Wiesblatt had a breakout season in 2019-20 marked by a 31-point improvement to finish with 25 goals and 45 assists in 64 games to rank second in team scoring behind Protas.

“Ozzy brings speed, playmaking, and offense to the lineup, which makes it difficult to play against a talented skater like him,” said Sharks general manager Doug Wilson. “His tenacity for the puck paired with his ability to retain possession and drive the offensive side of the game, along with his character on and off the ice, makes him a valuable player for our organization.”

Ozzy Wiesblatt has signed an entry-level contract with the San Jose Sharks.

📲Get the details on the Raiders App, or online here: https://t.co/EfsijF7NKx

One of two Raiders selected in the 2020 NHL Draft, the opening round also saw the Montreal Canadiens call upon defenceman Kaiden Guhle with pick No. 16, marking the first Prince Albert player to be selected in the first round since Leon Draisaitl went third overall to the Edmonton Oilers in 2014.

“The chance to develop my game in Prince Albert has been huge for me,” Guhle said following his selection per Lucas Punkari of the Prince Albert Daily Herald. “(Head coach) Marc Habscheid and (assistant coach) Jeff Truitt were huge in not rushing me and they wanted to put me in the best positions.

“I feel like my game can translate well to the next level. With the way the NHL is now, you need to be able to skate in order to play and I feel like that’s my biggest attribute. After I  get a couple of training camps under my belt, I’ll have a better idea of what the pro game is like and I’ll have a better understanding of the speed and pace of the game. It’s up to me though after I finish my time in junior hockey to show the team what I can do.”

A sizable rearguard who brings plenty of defensive prowess and an evolving offensive game, the native of Sherwood Park, Alta., will also represent the Raiders as part of Team Canada at the upcoming World Junior Championship.

“(Guhle) is a smart kid who gets hockey and gets life,” Habscheid, who led Canada to a silver-medal finish at the 2003 World Juniors, told Jim Matheson of the Edmonton Sun. “Sometimes you’re trying to project what players are going to be (when drafted) but I know what this kid is all about … I’m not in that (Canadian) coaching office, but they’ve got lots of offensive guys and I know Kaiden can defend.”

Congratulations to Kaiden Guhle on being selected 16th overall by the Montreal Canadiens!#GoRaidersGo #GoHabsGo https://t.co/4zYAUqEPUQ

Back with the Raiders, Guhle will be looked to provide leadership to a Prince Albert squad that this offseason saw the graduations of captain and fellow defenceman Zack Hayes as well as forward Brayden Watts, both of whom are continuing their careers in the pro ranks.

Meanwhile, Guhle will also provide invaluable guidance on the back end where a pair of Prince Albert rearguards are earmarked for the coming NHL Draft, a group which includes Nolan Allan, the third-overall selection from the 2018 WHL Bantam Draft, as well as Landon Kosior, who had an impressive freshman campaign that counted 23 points, third-most among WHL first-year blue-liners.

Between the pipes, Prince Albert will return overage netminder Max Paddock. Joining the Raiders last January, Paddock put up a remarkable showing upon arriving to his new club, a 19-game stretch that produced a 13-3-1-2 record alongside a 1.67 goals-against average and .935 save percentage.

With that type of important veteran experience throughout their lineup balanced by intriguing upcoming talent, the Raiders are once again a threat to rise in the WHL when the puck drops for the new season.