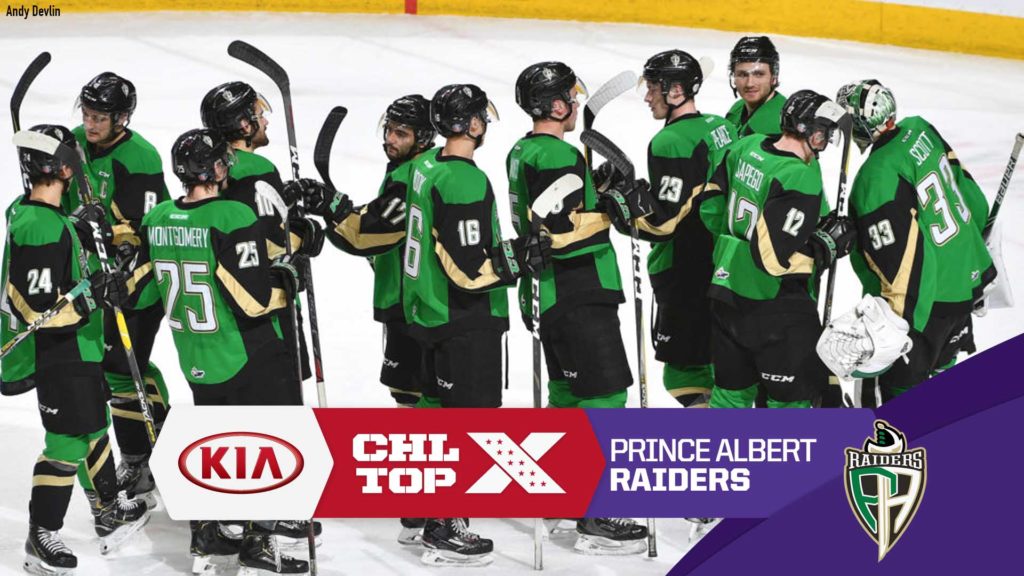 For the second time this season, the Western Hockey League’s Prince Albert Raiders (53-9-2-2) draw the focus of the Kia CHL Top 10 Spotlight after ranking second in Week 25, marking the 23rd time this season the team has finished within the Top 10.

The ranking comes after Prince Albert wrapped the week with a pair of victories over the East Division rival Swift Current Broncos in which the Raiders shut down the opposition and combined for 14 goals. It also comes on the heels of last week’s 6-0 win over the Broncos.

Raiders netminder Ian Scott, a fourth-round pick by the Toronto Maple Leafs in 2017, picked up all three shutouts, including a 24-save performance against the Broncos to begin the streak. The 20-year-goaltender has gone more than 186 minutes without allowing a goal, while his eight shutouts stand atop the entire CHL circuit, one ahead of fellow WHL netminder Dustin Wolf of the Everett Silvertips, a three-time recipient of CHL Goaltender of the Week honours. However, this week, that distinction went to Scott for the second time this year after he claimed the Raiders’ single-season shutout record with seven perfect games.

“It’s pretty crazy to think about (how) much I’ve grown as a player since I came to Prince Albert a few years ago,” Scott told Lucas Punkari of the Prince Albert Daily Herald. “My play hasn’t been the strongest the last couple of years, but I’ve been able to work on a lot of things personally and that’s really helped to improve the way that I’ve this season.”

Through 47 games, Scott owns a 37-7-1-2 record alongside a .932 save percentage and 1.82 goals-against average. He leads the WHL in shutouts, while ranking second in all other categories, behind only Wolf for the top spot.

The three-straight wins pushed the Raiders to 110 points, as the team was presented with the Scotty Munro Memorial Trophy, awarded to WHL regular-season champion. It marks just the second time the Raiders have captured the trophy in their 37-year history, and the first time since the 1984-85 campaign when they finished with 119 points and went on to win their lone Memorial Cup.

“It’s obviously a special feeling when you can clinch the Scotty Munro Trophy, but the hard work starts now and we’re going to be focusing on playing the right way here before the playoffs,” Raiders forward Dante Hannoun told Punkari. “It’s a completely different game when you get to the postseason and the biggest keys are going to be focusing on the little details and playing as a group, which are things that we’ve been doing already.”

Before the Raiders prepare for the playoffs, however, they will first need to close out the regular season, with two games remaining on the slate in a home-and-home series versus the provincial rival Saskatoon Blades. The Raiders are 5-1-0-0 in this year’s season series against Saskatoon.