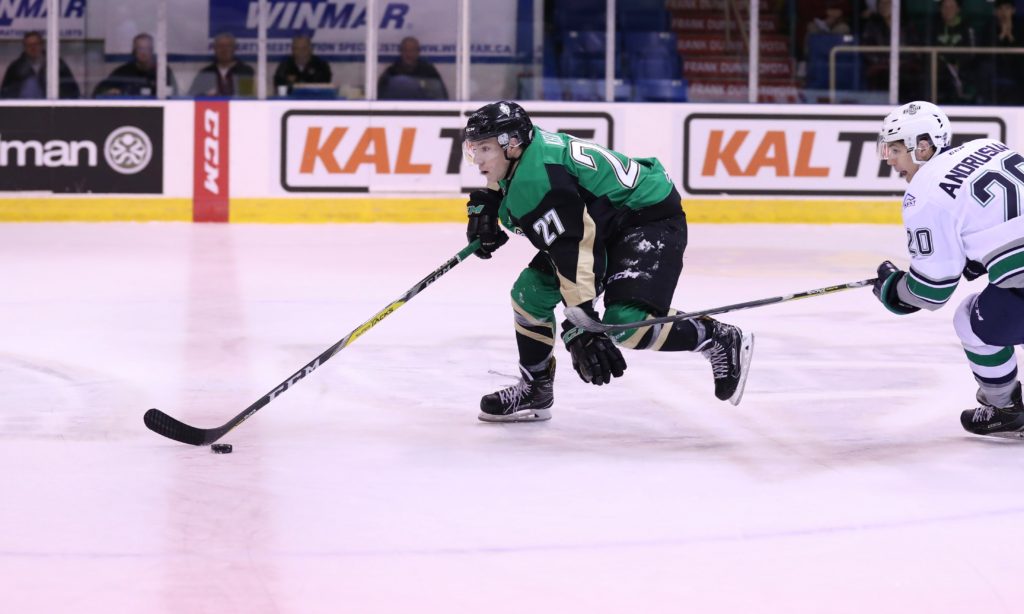 In the first, the Cougars capitalized on a Raiders’ turnover at the 4:53 mark. Jared Bethune collected the puck, out-waited Nicholas Sanders and put the puck into the net to make it 1-0. It was Sanders’ only blemish of the period, however. He was fantastic between the pipes in making 15 saves.

Early in the second, Prince George extended their lead on a power play. Kody McDonald wired a one-timer past Sanders’ pad give the Cougars a 2-0 advantage. Late in the period, the Raiders got back within one following an extended power-play chance. Parker Kelly deflected Cameron Reagan’s point shot past Ty Edmonds with 2:20 left in the frame to make it 2-1.

The score stayed that way until just after the mid-period break in the third. Jesse Gabrielle finished off a cross-ice one-time feed from Brad Morrison into the empty side of the net to give Prince George a 3-1 lead. With 4:03 remaining, Colby McAuley’s wrist shot off the rush snuck through Sanders to put the Cougars up 4-1. Less than two minutes later, Cavin Leth wired a shot past Edmonds on the rush to bring the Raiders back within two.

Sanders was strong in net throughout the game for the Raiders, finishing with 30 saves in a losing effort. At the other end of the ice, Edmonds was just as good for Prince George. He ended the night with 30 saves to his name.

The Raiders return to the Art Hauser Centre on Wednesday, November 23 against the Swift Current Broncos. Puck drop for the game is 7 p.m. For tickets, visit the Raider Office, call 306-764-5348 or online at raiderhockey.com.