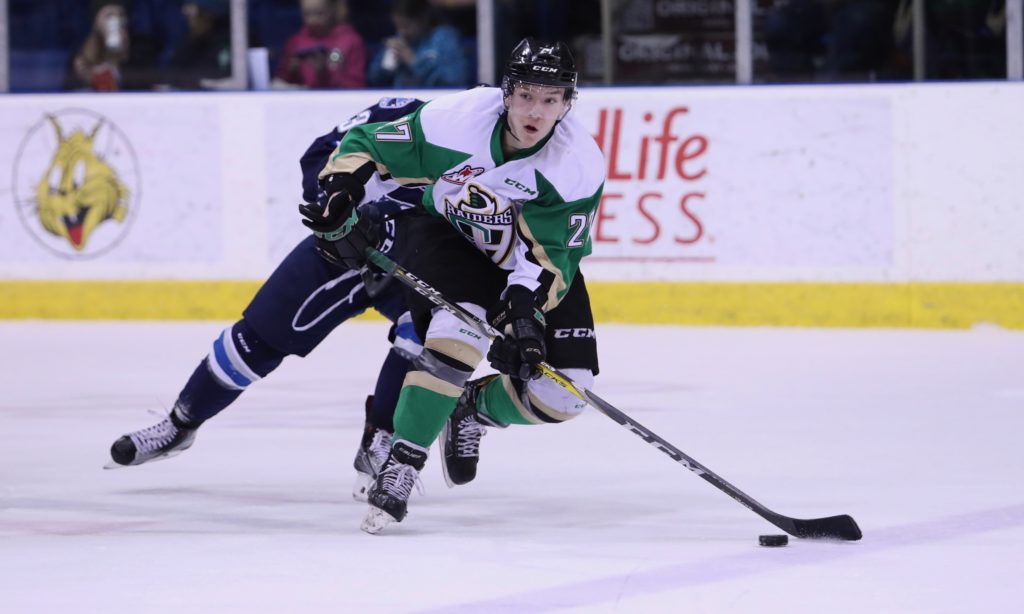 Prince Albert, SK – Parker Kelly is heading back to the nation’s capital to take part in the Ottawa Senators’ 2017 rookie camp and tournament.

The Camrose, AB product will join the Senators’ rookies for a practice at the Bell Sensplex before opening the three-team tournament on Saturday, Sept. 9 against the Montreal Canadiens at the Ricoh Coliseum in Toronto.

Kelly is one of 23 players representing the Senators at the rookie tournament. The team will be led by Kurt Kleinendorst, who is the head coach of the AHL’s Belleville Senators.

The ’99-born forward went undrafted this off-season, but earned an invitation to Ottawa’s development camp this summer. He was picked in the seventh round of the 2014 WHL Bantam Draft. Over the course of his 140-game WHL career, Kelly has 29 goals and 33 assists. He led the team in scoring following the trade deadline with 16 goals and 13 assists in 30 games.

Kelly will be facing off against teammate and Maple Leafs draft pick Ian Scott during that tournament on Sunday, September 10.

Two other Raiders will also be attending NHL rookie camps this September. Jordy Stallard (2016, 127th overall) is suiting up for the Winnipeg Jets at the 2017 Young Stars Classic in Penticton, BC beginning on Sept. 7. Vojtech Budik (2016, 130th overall) is returning to Buffalo for the Sabres’ camp.

Kelly will be on hand as the Raiders open their 2017 training camp on Wednesday night. For the full schedule, click here. As part of camp, the Raiders host their annual Green And White Game on Saturday night at 7 p.m. Admission for the game is a monetary or non-perishable food item donation to the Prince Albert Food Bank.

The Raiders start the 2017 WHL Pre-season schedule on Sunday afternoon when the Saskatoon Blades visit the Art Hauser Centre for a Young Guns Game. Puck drop is 1 p.m. Tickets are available on Friday.