“It’s an electric barn”; Crocker reflects on playing in Art Hauser Centre for the first time among 2021-22 season moments 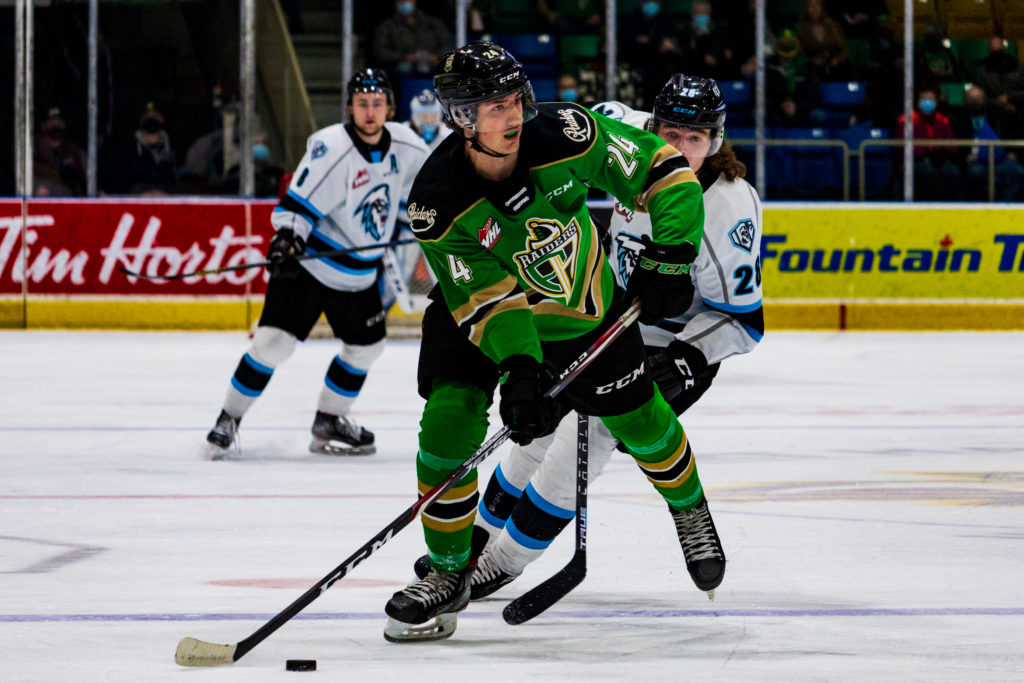 When he’s not dressed in the familiar green, black, and gold of a Prince Albert Raiders jersey, you can find Niall Crocker back in his hometown of Delta, B.C., more specifically on the golf course or out on the water. That’s how the Raider forward has spent much of his summer, aside from training for the upcoming hockey season.

“I train in the morning in Delta and then sometimes I hit the course,” Crocker said. “I’m heading up to go surfing soon too. I’ve been back home for a few months now, and it’s been pretty good so far.”

In his second WHL season, Crocker suited up for 64 regular season games and five playoff games. The 17-year-old scored his first Western Hockey League goal on October 13th, 2021 against the Moose Jaw Warriors. The tally stood up to be the game winning goal in a 3-2 win for Prince Albert’s first victory of the season.

The 2021-22 campaign also marked the first season that Crocker got the chance to play in front of fans at the Art Hauser Centre. His rookie season in the league, like many others, had a shadow cast on it by the pandemic among the bubble season in Regina. Crocker talked about his experience from his second year in the league, from scoring his first goal to playing at the Art Hauser Centre.

“The first year in the bubble was definitely interesting, because I would always hear about how great our fans are in PA and how the building is, which is pretty electric. I didn’t get to experience that in my first year. Coming in for the home opener this year, I didn’t really know what to expect, but it was a pretty electric barn. It’s just a great crowd to play in front of, and it’s such a supportive town. The team was great; I can’t say enough about the guys. The old guys are leaders, and the young guys fit right in.

“Scoring my first goal was pretty good; I remember (Kaiden) Guhle took a shot from the point and I tipped it in, so that was a really cool moment for me.”

Playing in 64 of 68 regular season games last year, Crocker was really able to learn from veteran players on the team about what it takes to play at the WHL level. He says Reece Vitelli and Remy Aquilon, the two Raider graduates, helped grow his game.

“Just watching those older guys and seeing how good they are with their skating and puck control helped me a lot. Just seeing how much they value the puck and how they make plays with the puck in so little space and time was cool. During practice, I practiced things like that, and as the season goes on just working with those older guys and watching what they do just grows on you. I think the thing I most improved on was patience with the puck and valuing it because of those guys.”

The 2022-23 season marks the first time that the Raiders will travel to the B.C. Division since 2019. With lots of family back home out west, Crocker says he’s excited for the opportunity to play in front of his family when the Raiders’ B.C. road trip comes around at the end of January.