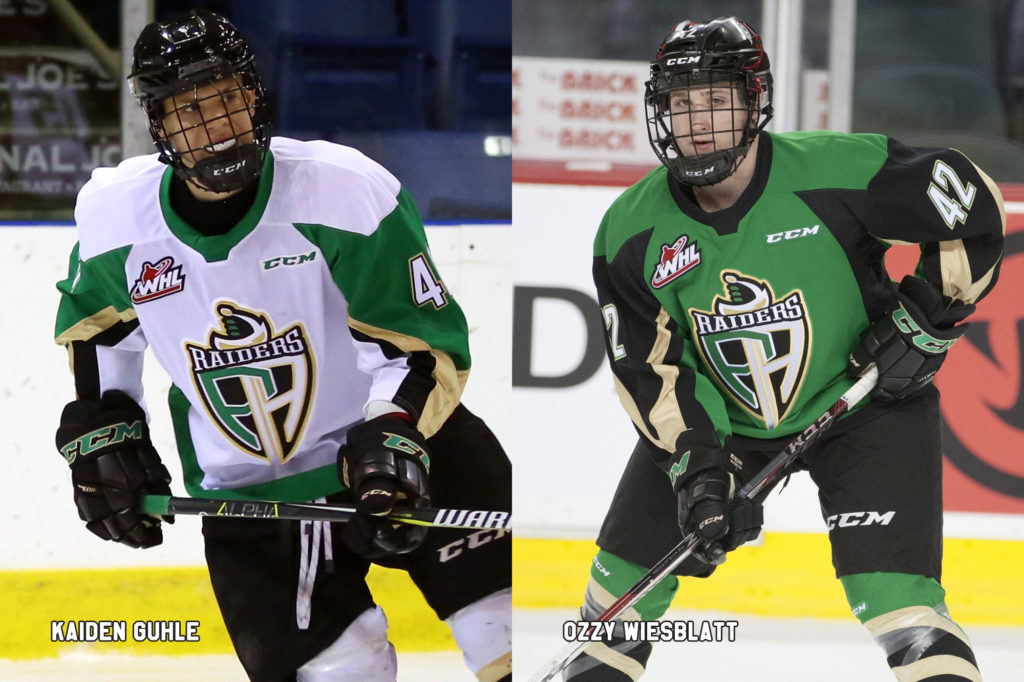 Prince Albert, SK – Prince Albert Raiders prospects Kaiden Guhle and Ozzy Wiesblatt were two of 28 WHL players to be invited to Hockey Canada’s national under-17 development camp as the road to the 2018 World Under-17 Hockey Challenge begins.

The camp itself will take place from July 21-27 in  at the Markin MacPhail Centre at WinSport’s Canada Olympic Park Calgary, Alta.

Guhle and Wiesblatt are coming off impressive seasons with their respective midget clubs. Guhle, the first overall pick in the 2017 WHL Bantam Draft, had 14 goals and 25 assists in 35 games for the CSSHL’s OHA Edmonton Prep. The Sherwood Park, AB product also earned CSSHL Freshman of the Year and Top Defenceman awards at the end of the year.

Wiesblatt, picked 25th overall by the Raiders in 2017, scored 21 goals and added 20 assists in 30 games for the AMHL’s Calgary Buffaloes. He finished eighth in AMHL scoring. The Calgary, AB product also scored in his lone game as a call up with the Raiders this season.

Related Links
Hockey Canada Unveils Names of 111 Players Invited to National U17 Development Camp Wiesblatt: "It was probably easily the best moment of my life."

For the duration of the week-long camp, the players – 12 goaltenders, 36 defencemen, and 63 forwards – will be split into six teams for on- and off-ice training, fitness testing, practices, intrasquad games, and classroom sessions.

The breakdown by WHL players includes four goaltenders, 10 defencemen, and 14 forwards. For many of the WHL players invited to the camp, it won’t be their first time attending the Markin MacPhail Centre at WinSport. Of the 28 WHL drafted players invited to July’s camp, 26 participated in the 2017 WHL Cup, featuring eight players from British Columbia, who won gold at the event, including golden-goal scorer Ben King, a forward prospect of the Swift Current Broncos.

From the other provinces in Western Canada, Alberta boasts the highest total with 13 players from the Wild Rose province while four came from Saskatchewan, and three more from Manitoba.

A quartet of Alberta players invited to the camp also led the 2017 WHL Cup in scoring. Crnkovic led all players with 12 points (3G-9A) while McClennon finished with 10 points (6G-4A). The highest-scoring defenceman from the tournament, Guhle recorded nine points (5G-4A) and forward Jake Neighbours (Airdrie, Alta. / Edmonton Oil Kings) rounded out the top four for scoring with seven points (1G-6A). Overall, 18 of the 28 WHL players invited were selected in the first round of the 2017 WHL Bantam Draft.

“The national under-17 development camp provides a unique opportunity for players to learn about what it takes to be part of Team Canada alongside the best young talent in the country,” said Shawn Bullock, Hockey Canada’s senior manager of hockey operations and men’s national teams. “The players are here with the ultimate goal of wearing the Team Canada jersey in international competition, and we are supporting them in that goal by providing the on- and off-ice experiences they need to develop and grow as high-performance athletes.”

Following the development camp, players will continue to be evaluated through the early season before 66 are named to one of three Canadian national teams – Team Canada Black, Team Canada Red, and Team Canada White – who will compete at the 2018 World Under-17 Hockey Challenge scheduled for Nov. 3-10 in Saint John and Quispamsis, N.B.

Media accreditation for the Team Canada Summer Showcase taking place at WinSport’s Markin MacPhail Centre that includes Canada’s national under-17 development camp can be requested online. The full camp schedule will be available at a later date at HockeyCanada.ca.