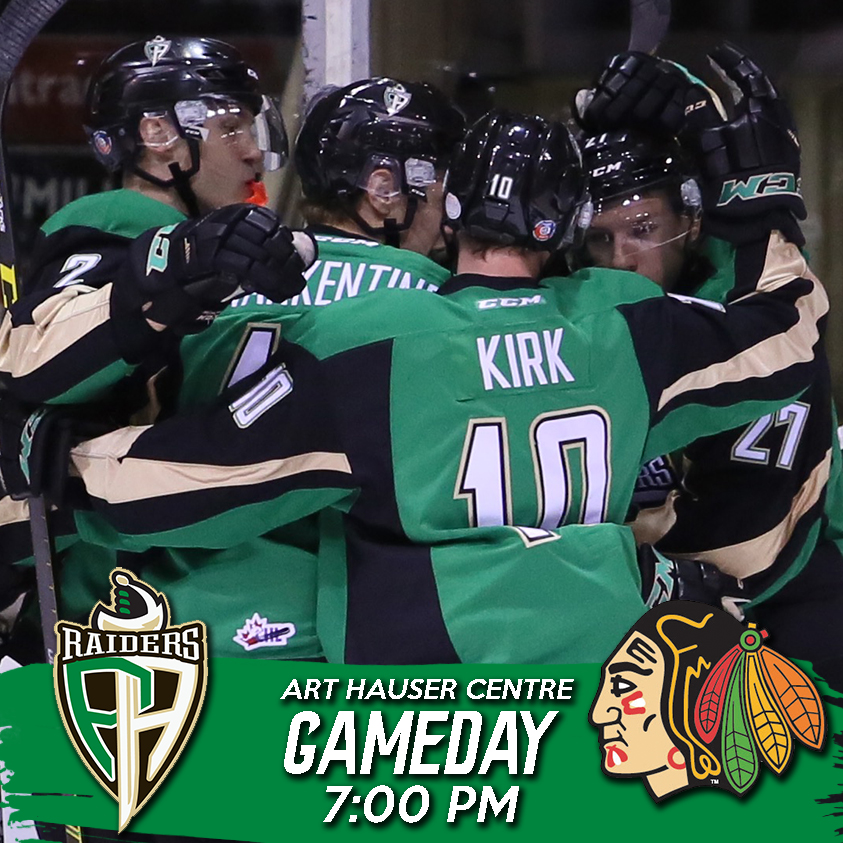 RAIDER REVIEW: The Prince Albert Raiders (2-2-0-0) will try to win back-to-back games for the first time this season when the Portland Winterhawks (3-2-0-0) visit the Art Hauser Centre on Wednesday night. On Sunday, the Raiders scored four unanswered goals to beat the visiting Edmonton Oil Kings 5-2. Sean Montgomery scored twice in the second period to spark the comeback. Rylan Parenteau made his first start of the season, stopping 33 of the 35 shots he faced.

BORN IN THE USA: The Raiders welcome the U.S. Division to Prince Albert this season for its biennial road trip through the East Division. Last year, the Raiders travelled through the northwest United States and finished with a 3-1-0-1 record, picking up wins over the Winterhawks, Tri-City Americans and Spokane Chiefs.

SCORCHING START: Simon Stransky and Austin Glover continued their hot start to the season. Both players assisted on Sean Montgomery’s first goal on Sunday evening. Stransky and Glover have recorded at least a point in every game the Raiders have played this season. Stransky leads the team with eight points, while Glover is right behind with seven.

SECONDARY SCORING: The Raiders received some offensive help during Sunday evening’s game against the Oil Kings. Four different Raiders – Parker Kelly, Sean Montgomery, Zack Andrusiak and Tim Vanstone – scored their first goals of the season.  Prior to the game, Simon Stransky (3), Austin Glover (3) and Kolten Olynek (2) accounted for all eight of the Raiders’ goals in the first three games.

FIRST!: Three Raiders recorded milestones during Sunday evening’s game against Edmonton. Zack Andrusiak scored his first WHL goal when he beat Patrick Dea at the 1:22 mark of the third period. Lane Kirk picked up his first WHL point when he assisted on Sean Montgomery’s game-winning goal at the 5:50 mark of the second. Cameron Reagan picked up his first two points as a Raider by assisting on Andrusiak and Tim Vanstone’s third period goals.

ROSTER NEWS: Prior to Sunday’s game, the Raiders dealt 1997-born defenceman Brennan Riddle to the Lethbridge Hurricanes in exchange for a pick in the 2018 WHL Bantam Draft. Riddle suited up in 111 games for the Raiders, contributing 10 assists and 76 penalty minutes.

RANKED: Goaltender Ian Scott and winger Simon Stransky were named to the NHL Central Scouting Preliminary list on Tuesday morning. Scott, 17, has a 1-2-0-0 record this season with a 3.37 goals-against average and a 0.919 save percentage. Stransky, 18, has eight points in four games so far this season.

NEXT UP: The Raiders are back at it on Thursday night when they head to Saskatoon for a game against the Blades. Puck drop at the SaskTel Centre is set for 7:05 p.m. The next Raiders’ home game is Saturday, Oct. 15 against the defending WHL champion Brandon Wheat Kings. For tickets, visit raiderhockey.com or call 306-764-5348.