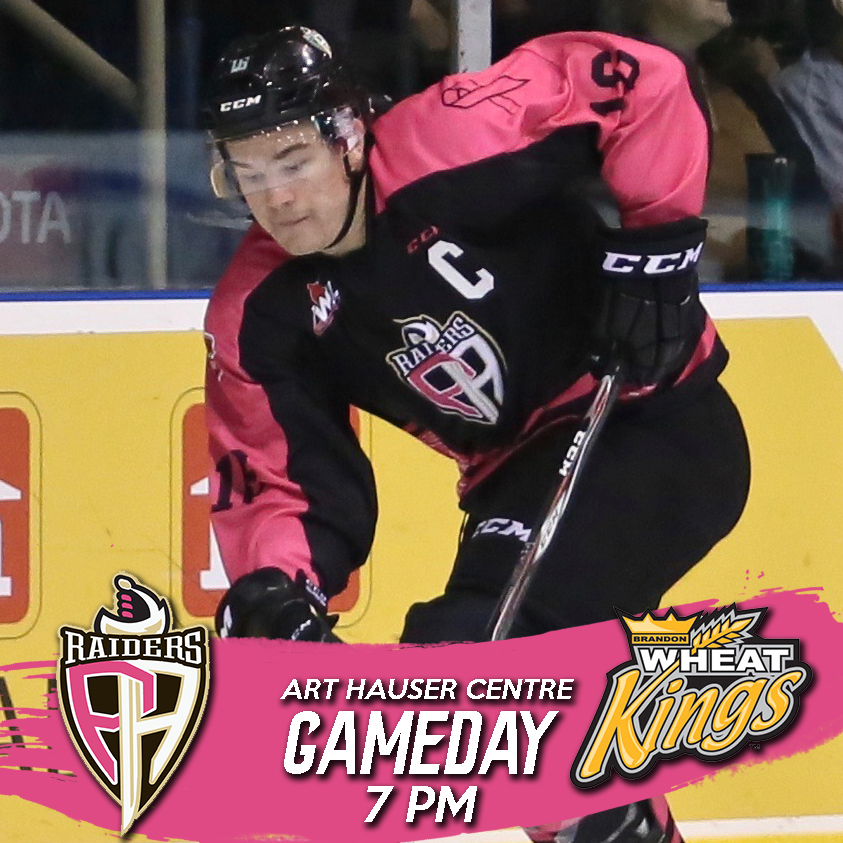 RAIDER REVIEW: The Prince Albert Raiders (3-5-0-0) will try to sweep their home-and-home series with the Brandon Wheat Kings (2-3-2-0) on Saturday night when they visit the Art Hauser Centre. Last night in Brandon, Austin Glover scored 45 seconds into overtime to lift the Raiders to a 3-2 win over the Wheaties. Simon Stransky continued to lead the offence, finishing the game with two assists. Luke Coleman and Nic Holowko also scored for the Raiders. Ian Scott made 32 saves to pick up his second win of the season.

NO OFFENCE FROM THE DEFENCE: Eight games into the season and the Raiders are still searching for their first goal from a defenceman during the 2016-17 season. The defenceman on the roster have combined for seven assists in 39 combined games. Last season, defenceman Jesse Lees finished third on the team in scoring with 23 goals.

PINK IN THE RINK: Saturday is Pink In The Rink Night at the Art Hauser Centre. There will be haircuts in the lobby courtesy of Hair Revolution. For every walk-up ticket sold, $1 will be donated to Victoria Hospital. If fans raise $2,500, Raiders captain Tim Vanstone will shave his head following the game.

NEXT UP: The Raiders hit the road for three games as they head to Alberta for this first time this season. The road trip begins on Friday night when they visit the new Rogers Place to take on the Edmonton Oil Kings. The Raiders will also take on the Red Deer Rebels and Calgary Hitmen during the road trip. The next Raiders’ home game is on Friday, October 28 against the Spokane Chiefs. Puck drop is 7 p.m. For tickets, click here or call 306-764-5348.