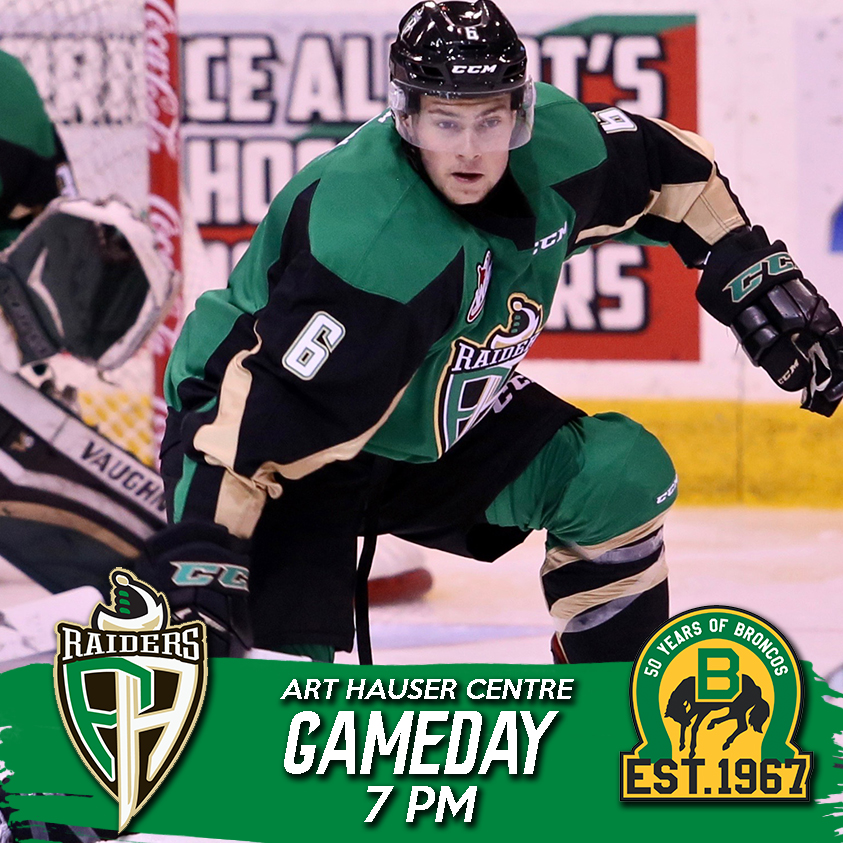 RAIDER REVIEW: The Prince Albert Raiders (5-16-1-0) return to the Art Hauser Centre to take on the Swift Current Broncos tonight. It’s the first Raiders’ home game in two weeks as the club just returned from their biennial B.C. road trip. In the final game of the trip in Prince George, the Raiders were doubled up by the B.C. Division-leading Cougars 4-2. After going down 2-0, Parker Kelly deflected Cameron Reagan’s point shot past Ty Edmonds. However, the Cougars responded with two goals in the third before Cavin Leth made it a 4-2 game. Nicholas Sanders made 30 saves in a losing effort for the Raiders.

VS. SWIFT CURRENT: This is the third meeting of the season between the Raiders and the Broncos during the 2016-17 campaign. Swift Current has won both meetings this season. In the last contest, Calvin Spencer scored with 3:24 left in the third period to give the Broncos a 4-3 win in Swift Current. Tim Vanstone, Luke Coleman and Austin Glover all scored for the Raiders in the loss.

MEET THE NEW GUYS: Following Friday night’s game in Prince George, the Raiders dealt ’97-born defenceman Brendan Guhle to the Cougars for ’99-born defenceman Max Martin, ’98-born winger Kolby Johnson, a first-round pick in 2018 and a third-round pick in 2019. Martin – a product of Winnipeg, MB – had three goals and four assists in 19 games with Prince George before the trade. Hailing from Kerrobert, Johnson has a goal and three assists in 47 career games played to go along with 81 penalty minutes.

NEAR THE TOP: Since being acquired by the Raiders in October, Nicholas Sanders has been one of the top goaltenders in the WHL. Heading into Tuesday night’s action, Sanders was fourth in the league with a 2.46 goals-against average for both the Americans and the Raiders. Taking into account just his playing time in P.A., his GAA drops to 2.37 and his save percentage is a healthy 0.922%.

NEXT UP: The Raiders return to the ice on Friday night when they host the Medicine Hat Tigers on Saskatchewan Rush Night at the Art Hauser Centre. The Raiders will wear jerseys that blend the brands of the Raiders and Rush. The game-worn jerseys will be auctioned off. Also in attendance at the game will the NLL Champion’s Cup, Crush Girls and the Rush’s mascot, Bruiser. Puck drop is at 7 p.m. Tickets can be purchased at by clicking here, in the Raider Office, or by calling 306-764-5348.