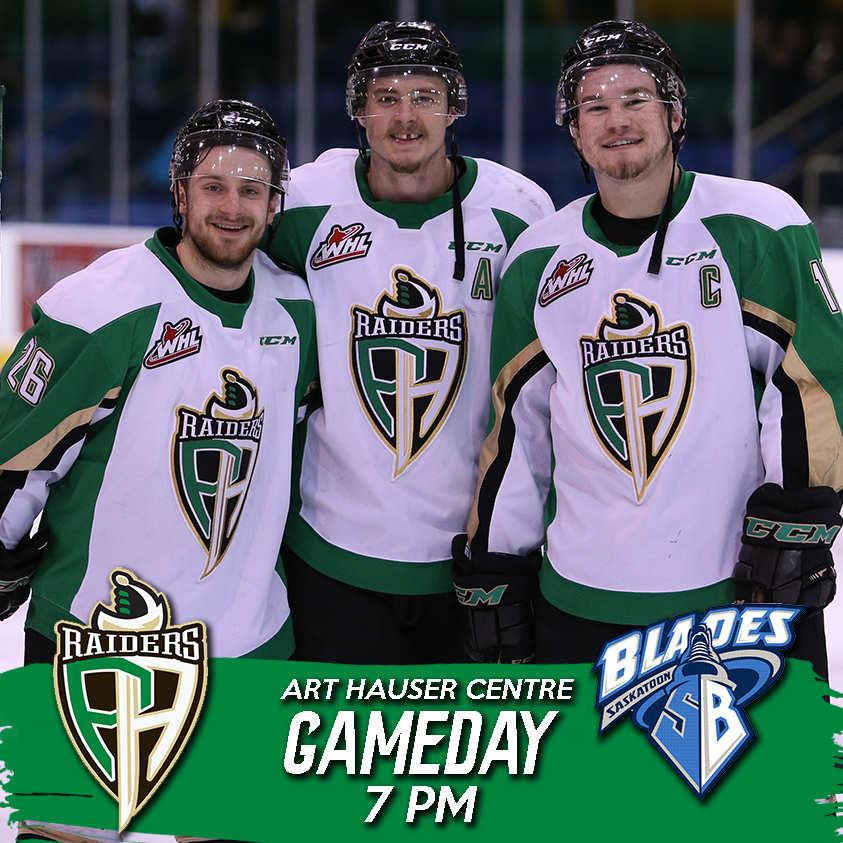 RAIDER REVIEW: The Raiders (20-44-5-2) conclude the 2016-17 season tonight when they host the Saskatoon Blades (28-34-7-2) at the Art Hauser Centre. It’s the second leg of a home-and-home series that opened on Friday night at SaskTel Centre with the Raiders falling 5-3 to their Hwy 11 rivals. It was a good start for the guys in green on St. Patrick’s Day as Cavin Leth opened the scoring midway through the first. However, the Blades tied the game before the end of the first 20 minutes. In the second, the Blades found the back of the net three times to take a 4-1 lead into the third period. In those final 20 minutes, Parker Kelly and Spencer Moe scored four minutes apart to bring the Raiders back within a goal. It was as close as the Raiders got as Josh Paterson rounded out the scoring at 5-3 with an empty-net goal with one second remaining. Ian Scott, who relieved Nicholas Sanders after the Blades’ fourth goal, made 10 saves in relief and was saddled with the loss.

VS. SASKATOON: This is the last game of the year between the Raiders and the Blades. The Raiders currently trail the season series 2-5-0-0. However, both of those wins came in the friendly confines of the Art Hauser Centre. They have also downed Saskatoon four of the last five times the Blades visited Prince Albert.

IRON MEN: The Raiders will have two players suit up for all 72 games this season – winger Parker Kelly and defenceman Zack Hayes. Through 71 games, Kelly is second on the team in points with 43 (21 goals, 22 assists). In the same amount of games, Hayes has two goals and 10 assists to go along with 80 penalty minutes.

STREAK BUSTED: Spencer Moe got back into the goal column on Friday night. The 16-year-old from Calgary scored his first goal since January 15 against the Regina Pats – a span of 22 games.

NEXT UP: The Raiders head into the off-season following tonight’s game, however there are still events in the Art Hauser Centre. On March 31, the Raiders and the Prince Albert SPCA host the Seventh Annual Warren Harper Memorial Father-Daughter Gala. Then on May 5 and 6, the PBR comes to town for the Clunie-Cooper Memorial. For ticket information, visit the Raider Office from Monday to Friday between 9 a.m. and 5 p.m.