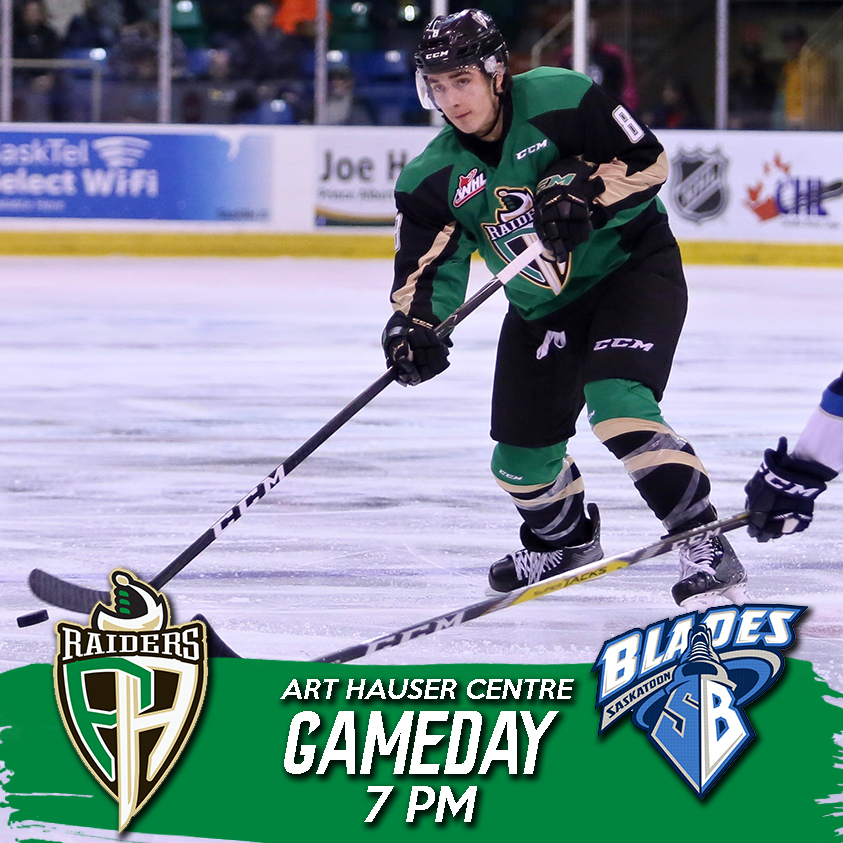 RAIDER REVIEW: The Prince Albert Raiders (7-26-1-1) return from the holiday break to take on the rival Saskatoon Blades (13-19-3-1) at the Art Hauser Centre, opening a mid-week home-and-home series.  In the last game before the break, the Raiders were downed 4-3 by the Swift Current Broncos in Prince Albert. The Raiders jumped out to a 2-0 lead in the first period thanks to goals from Loch Morrison and Max Martin. However, Kole Gable and Aleksi Heponiemi found the back of the net for the Broncos before the end of the period. In the second, Gable notched his second of the game to give the visitors a 3-2 lead. Austin Glover brought the Raiders back even late in the third period, making it a 3-3 game with 4:45 to play. About a minute later, Kade Jensen scored the game-winning goal for the Broncos. Ian Scott made the start for the Raiders, making 31 saves in the loss.

VS. SASKATOON: This is the third meeting of the season between the Raiders and the Blades and the second at the Art Hauser Centre. The Blades have won the first two meetings of the season so far.

STAYING HOT: Austin Glover must be hoping his hot play of late wasn’t cooled by the holiday break. The 20-year-old centreman has registered at least a point in his past nine games, scoring six goals and adding seven assists in that span. Glover is now tied for the team lead in goals with 12 in addition to chipping in 14 assists.

HOLIDAY TRADITION: This is the fifth consecutive season that the Raiders and Blades have opened the second half of the season at the Art Hauser Centre. The Raiders have won three of those four games against their rivals by a cumulative score of 16-8.

AT THE WORLDS: Simon Stransky, Vojtech Budik and the Czech Republic opened the 2017 IIHF World Junior Hockey Championship on a positive note on Boxing Day. The Czech Republic downed the defending champion Finnish team by a 2-1 score.  They are back at it today at noon against Switzerland before having a day off on Wednesday.

NEXT UP: The Raiders head down to Saskatoon on Wednesday night to close out the home-and-home series with the Blades at the SaskTel Centre. The next Raiders’ home game is on Friday night when the Regina Pats visit the Art Hauser Centre for a 7 p.m. contest. Tickets can be purchased here, in the Raider Office, or by calling 306-764-5348.