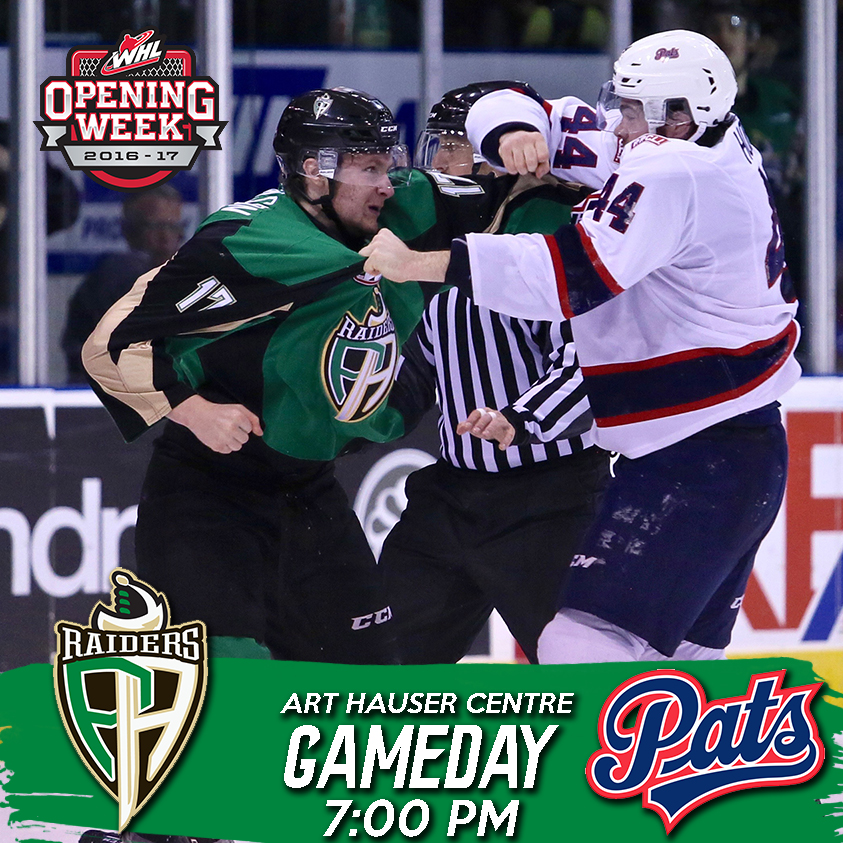 RAIDER REVIEW: Simon Stransky found the back of the net in overtime to lift the Raiders to a 4-3 win over the Regina Pats on Friday night in Regina. It was Stransky’s second goal of the game, completing a three-point night for the ’97-born import winger. Ian Scott was sensational in net for the Raiders, making 42 saves – including 15 in the first period – to earn the Raiders’ first win of the 2016-17 season.

CLOSE GAMES: The Raiders and Pats have proven to be evenly-matched teams dating back to last season. Including last night’s 4-3 overtime game, eight of the last nine meetings have been decided by two goals or less. Five of those games were one-goal games, with four being decided in overtime.

DEFENDING HOME ICE: The Raiders were a strong team when they took to the ice of the Art Hauser Centre, winning 23 of their 36 contests played in Hockey Town North during the 2015-16 season. Included in that record were three home wins against the Pats.

SIGN ON THE DOTTED LINE: On Friday, the Raiders announced the signing of 1998-born forward Zack Andrusiak. A product of Yorkton, Andrusiak was an invitee to this year’s training camp that earned a contract with his play. He dressed in all five of the Raiders’ preseason contests, picking up a goal and two assists. Last season, he played in the KIJHL, scoring 32 goals and chipping in 19 assists in 32 league games.

MAKING THEIR DEBUTS: Lane Kirk and Cody Thompson — both rookie Raiders defencemen — made their WHL debuts on Friday night in Regina. Kirk finished with a plus-one rating in the game, and played key minutes in the closing moments of regulation and overtime. Thompson was held off the scoresheet in his first WHL action.

NEXT UP: The Prince Albert Raiders next home game is on Friday, September 30 when they host the Swift Current Broncos at the Art Hauser Centre. Puck drop is 7:00 PM. Visit Raiderhockey.com or call 764-5348 to get your tickets now!