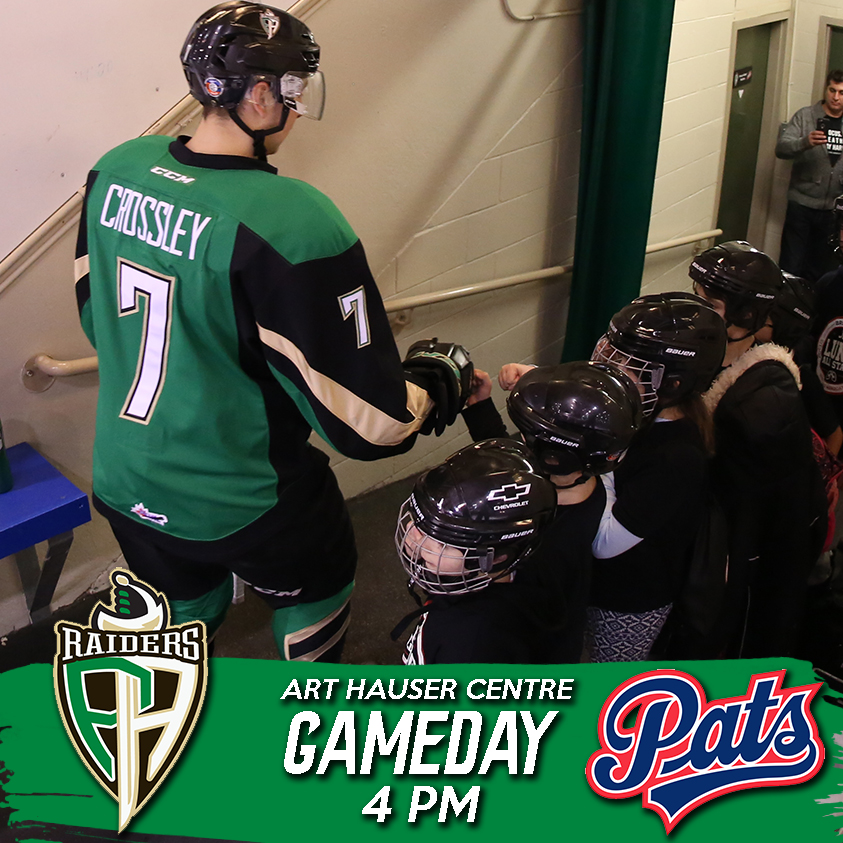 RAIDER REVIEW: The Prince Albert Raiders (16-39-3-2) return to the Art Hauser Centre for an afternoon contest with the Regina Pats (41-9-6-1), the top-ranked team in the CHL. In their last action, the Raiders defeated the Wheat Kings 4-1 in Brandon at Westman Place. Austin Crossley opened the scoring early in the first. Cavin Leth then deflected a Brayden Pachal shot home to make it a 2-0 game after 20 minutes. In the second, D-Jay Jerome banked a shot off of Travis Child and in to put the Raiders up 3-0. The Wheat Kings got on the board in the third period with a power-play marker. However, Parker Kelly responded to restore the Raiders’ three-goal lead and round out the scoring at 4-1. Ian Scott got his eighth win of the year, stopping 33 Wheat Kings shot in the victory.

VS. REGINA: This is the eighth and final meeting of the year between the Raiders and the Pats. The Raiders knocked off the Pats in the first contest of the season, but Regina has rattled off six straight wins over the Green and Gold. In the last game between the two, the Pats beat the Raiders 5-1 on Jan. 15.

AFTERNOON AFFAIRS: This is the final afternoon game for the Raiders this season. In six afternoon contests so far this season, the Raiders hold a 4-2 record. However, both of those afternoon losses came at the hands of the Pats.

MR. 250: Cavin Leth celebrated his 250th career game in style on Saturday night. The overager from Taber, AB tallied the game-winning goal when he deflected Brayden Pachal’s shot past Travis Child. Leth now has 39 goals and 27 assists in his WHL career split between the Raiders, Seattle Thunderbirds and Swift Current Broncos.

CROSSED OFF: Rookie Austin Crossley scored his first career WHL goal on Saturday night in Brandon. The 17-year-old from Fort St. John, BC has played in 21 games with the Raiders this season since joining the team in December.

NEXT UP: The Raiders open a home-and-home series with the Saskatoon Blades on Friday night at the SaskTel Centre. Game time is 7:05 p.m. The return match-up between the two clubs goes on Saturday night at the Art Hauser Centre. Puck drop is 7 p.m. Tickets can be purchased at raiderhockey.com, in the Raider Office, or by calling 306-764-5348.